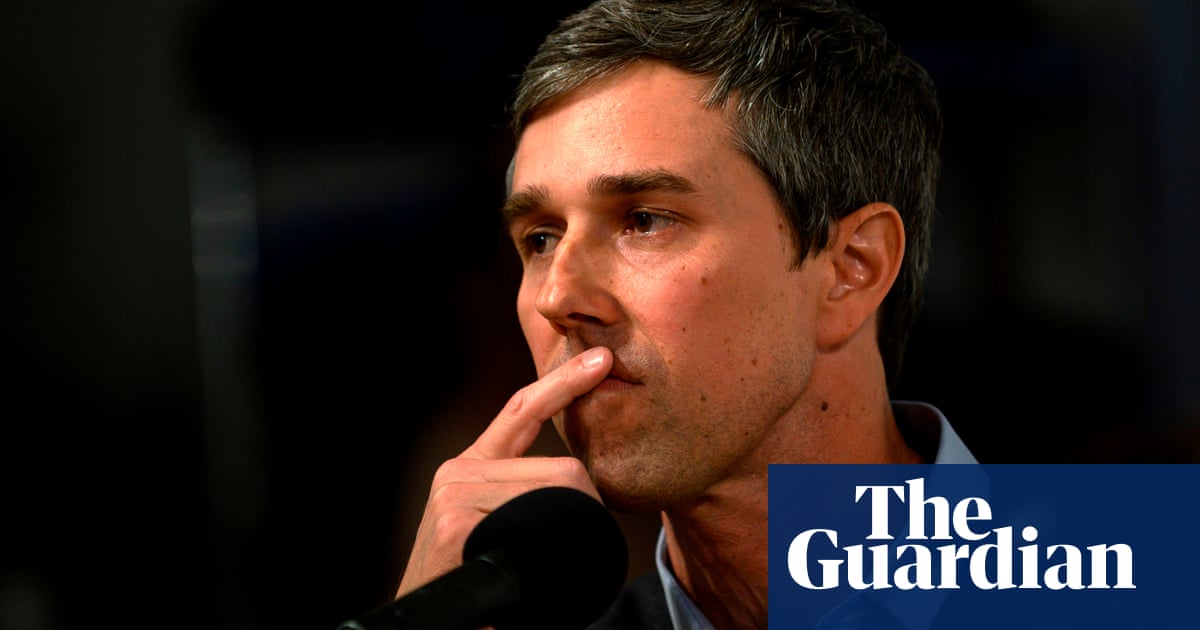 Democratic presidential contender Beto O’Rourke has acknowledged making mistakes as a teen and as a candidate as he responded to criticism of his campaign rhetoric toward his wife as well as writings he produced online when he was young.

During a taping of the Political Party Live podcast in Cedar Rapids, Iowa, he addressed criticism of his campaign-trail joke that his wife, Amy, has raised their three kids “sometimes with my help”.

O’Rourke made the comment at multiple campaign stops during his first swing through Iowa, eliciting laughs each time, but he also drew criticism as being insensitive to the challenges faced by single parents raising children.

O’Rourke said the criticism of his “ham-handed” attempt to highlight his wife’s work in their marriage was “right on”.

“Not only will I not say that again, but I will be much more thoughtful in the ways that I talk about my marriage,” he said.

O’Rourke, 46, also said he was “mortified” when he reread the violent fiction he wrote as a teen, which received fresh attention on Friday after a report outlined his involvement in a hacker group as a teen. O’Rourke wrote a handful of posts on the group’s message board under the name “Psychedelic Warlord”, including a fictional piece he penned when he was 15 about children getting run over by a car.

“I’m mortified to read it now, incredibly embarrassed, but I have to take ownership of my words,” he said. “Whatever my intention was as a teenager doesn’t matter, I have to look long and hard at my actions, at the language I have used, and I have to constantly try to do better.”

O’Rourke had said after an earlier campaign stop that it was “stuff I was part of as a teenager”.

“It’s not anything I’m proud of today, and I mean, that’s the long and short of it,” he said. “All I can do is my best, which is what I’m trying to do. I can’t control anything I’ve done in the past. I can only control what I do going forward and what I plan to do is give this my best.”

The comments came on the second day of a presidential campaign in which O’Rourke was seeking to establish himself as a unique voice in the race. He avoided what has become something of a tradition among the 2020 contenders by refusing to announce how much money he raised in the 24 hours after announcing his candidacy. He said it would be soon.

“I don’t have a definite plan,” he added. “We’re not ready to release them now.”

The former Texas congressman entered the 2020 presidential race on Thursday after months of speculation. He raised an eye-popping $80m in grassroots donations last year in his failed US Senate race in Texas against Republican Ted Cruz, all while largely avoiding money from political action committees. His early fundraising numbers will be an initial signal of whether his popularity during the Senate campaign will carry over to his White House bid.

Bernie Sanders has set the pace for grassroots donations in 2020, pulling in $6m during his first day as a candidate.

Asked if he thought he would top Sanders, O’Rourke said: “We’ll see.”

O’Rourke’s reception during his first Iowa swing was overwhelmingly positive, even as he launched his campaign by hitting a handful of counties that had shifted from supporting Democrat Barack Obama to backing Republican Donald Trump during the 2016 campaign.

Most of the towns O’Rourke visited during his first two days in the state were small and rural, manufacturing or farming towns.

The strategy set O’Rourke apart from the rest of the field, many of whom have focused their early swings on the state’s largest cities or on the traditionally blue counties that make up the bulk of the Democratic primary electorate.

Norm Sterzenbach, who is advising O’Rourke in Iowa, said the strategy came out of the Texan’s desire to do more intimate events in his first swing through Iowa.

“He didn’t want to do big rallies or big events. He wanted to get into communities and really talk to Iowans, and he wanted to go to smaller towns, smaller communities, and places that had been neglected” by politicians, he said.

It was an approach reminiscent of his Senate bid, where O’Rourke hit every one of the state’s 254 counties, even the most rural areas, some of which hadn’t been visited by Democratic candidates in years. O’Rourke didn’t commit to visiting all of Iowa’s 99 counties what’s locally known as the “Full Grassley”, after Iowa’s senior Republican senator, Chuck Grassley, who’s famous for doing the full swing. But he said he planned to visit as much of Iowa as possible.

That go-everywhere, speak-to-everyone strategy brought him within three points of defeating Cruz in Texas, the nation’s largest Republican state.