Holding the last pre-primary show on the Sunday of a holiday weekend doesnt encourage anyone to tune in. That might hurt Hillary Clinton as much as anyone 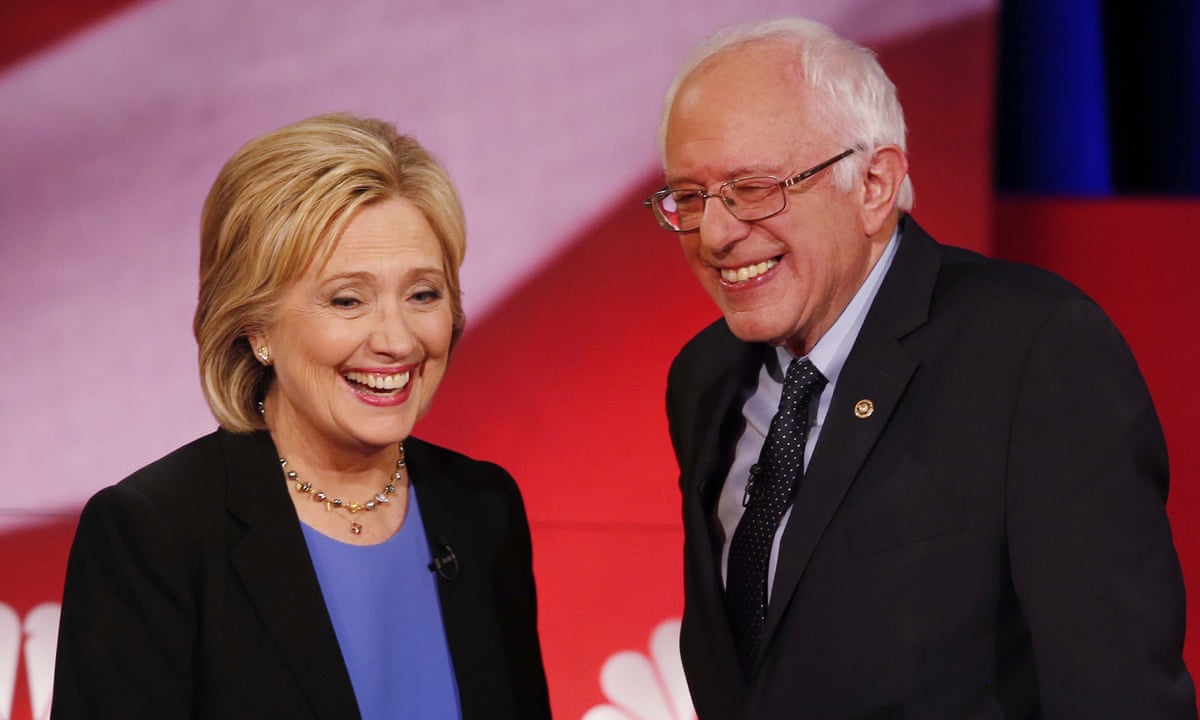 Hillary Clinton is a far better candidate when she is pushed to her limits by an existential threat. She was in 2008 when she was fighting a young Barack Obama; eight years later, against an older Bernie Sanders, she is again.

Sunday nights Democratic debate between Clinton and Sanders (and some guy who helpfully told us at the start that his name was Martin OMalley) came as the race finally tightened up in Iowa, two weeks before the states Democrats cast the first votes of the 2016 elections.

The most recent Des Moines Register poll the most respected polling in a state that is notoriously difficult to survey gave Clinton a slender two-point lead last week. The same poll placed her nine points ahead last month. As it happens, that change was not the result of Sanders gaining support, but rather because Clinton has been leaching support to the undecided category.

Her declining numbers could be the result of some especially ham-fisted decisions by her own team. Despite their candidates strong performance on stage, it was the Clinton campaign that pushed the Democratic National Committee to limit the number of televised debates, and to air them at less-popular broadcast times the weekend before Christmas, say, or on the night before a national holiday, as it was on Sunday.

But the few viewers who tuned in were treated to a fine show thanks to Bernie Sanders.

Other candidates glower or chuckle when theyre attacked but Sanders wears the kind of grimace that you flash when your doctor says he needs to check your prostate. And there were at least three times on Sunday that Sanders looked like he was undergoing a particularly intrusive medical procedure.

The first came when Clinton thwacked him for using the run-up to this latest Democratic debate to, um, revise his position favoring legal immunity for gun manufacturers.

Sanders curled his mouth upwards in a less-than-convincing smile as Clinton peppered him with every gun vote he had ever made that benefited the gun lobby. The litany included voting for guns on Amtrak and in national parks, which made Sanders sound like the passenger youd want to avoid on the sleeper car to the Grand Canyon.

The second lip-curler came when she attacked him for using the run-up to the debate to, um, revise his position on taxes to pay for his single-payer healthcare system. Clinton said she couldnt tell if Sanders was talking about his new healthcare plan or the old one that he had introduced to Congress nine times before.

So by the time the debaters reached the question of financial reform his special subject Sanders should have been standing on ground worthy of a genuine smile.

After all, just as the Republican candidates compete with one another to destroy, annihilate and utterly eviscerate Isis, so the Democratic candidates must promise to carpet bomb Wall Street with the kind of regulations that make sand glow. And, in that apocalyptic battle with lower Manhattan, there is no warrior with more burn than Brooklyn-born Bernie.

Sanders used his time to style himself as our commander-in-chief in the war against Goldman Sachs, promising there would be no Goldman Sachs hires for Treasury secretary, and jabbing Clinton repeatedly for taking giant speaking fees from the vampire squid itself.

Clinton responded with the kind of jujitsu that only a master samurai can deploy. She accused Sanders of attacking not just her but the man who wasnt on stage to defend himself: President Obama. She gallantly defended the Democratic hero at a debate sponsored by the Congressional Black Caucus, no less noting that Sanders had even encouraged a primary challenge to Obama before the last election.

That was when the senator grimaced for a third time.

Despite scoring a few points against Sanders, Clinton appeared weakest on her own pet subject in Sundays debate. Having defended Obama from all sides on healthcare and financial regulation, Clinton abandoned the fort on foreign policy: she blamed the Syrian president and the Iraqi prime minister; she blamed the Iranians and the Saudi Arabians. But she couldnt quite blame the man she had spent the rest of the night defending, despite her markedly more hawkish stance on national security.

Fortunately for Clinton, foreign policy is not Sanders strong point. Revolution is.

Revolution, it seems, is a promise that has a striking level of support among younger Democrats. One of the YouTube creators who asked a debate question via video admitted that his peers loved Bernie for talking bout a revolution.

Still, while the self-avowed socialist was trying to reassure older American voters about what he called the rational way forward, he repeated the word revolution about eight times too many to sound entirely rational. In addition to revolutionizing campaign finance and the economy, Sanders promised to lead a revolution against the financial and pharmaceutical industries, as well as the Pentagon budget.

Though revolution might appeal to the YouTube generation, the way that the leading candidates talked back to them cant possibly connect. Clinton, for instance, marveled at how many viewers they have (she currently has only 35,651 on YouTube). Sanders, for his part, talked about how Isis was transmitting information through the internet. The two baby-boomers Sanders will be 75 years old at the general election in November and Clinton will be 69 talked as if the digital world was illuminated by cathode ray tubes.

Then again, if the Democratic party really wanted to reach young voters, this was a curious time and format: a two-hour, 9pm debate on network television, on the Sunday night of a holiday weekend. Maybe Netflix can figure out what to do with a stage show featuring an angry old man, a newly-feisty former secretary of state, and a mayor-turned-governor who seems happy just being there.