Keep it in the Ground Act would ban all new fossil fuel leases on public lands and water, something activists view as a big gap in Obamas climate plan 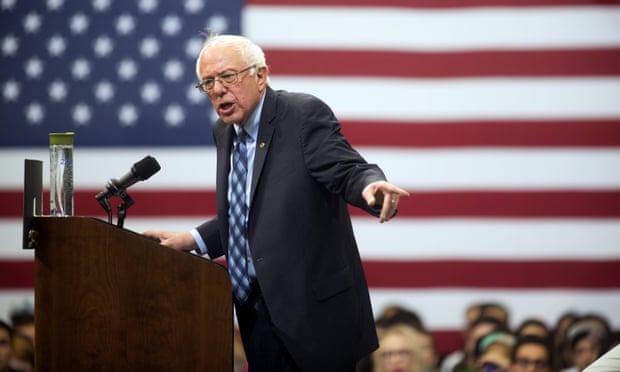 The Keep it in the Ground Act co-sponsored by the senator and Democratic presidential nominee aims at plugging one of the big gaps in Barack Obamas climate change plan: his administrations continued sanction of fossil fuel extraction on the governments lands and waters.

The bill, authored by Senator Jeff Merkley of Oregon, and supported by Democratic senators Barbara Boxer of California, Bill Cardin of Maryland, Kirsten Gillibrand of New York, Patrick Leahy of Vermont, and Elizabeth Warren of Massachusetts in addition to Sanders, says that the US could avoid the vast majority of fossil fuel emissions by stopping any new mining projects.

The bill seeks to ban new drilling leases in the Gulf of Mexico, Atlantic, Pacific and Arctic oceans as well as on government lands in the West.

On many of those areas, extraction is still in its very early stages. The potential emissions resulting from extracting and burning all fossil fuel on Federal land and water amounts to a significant percentage of the greenhouse gas emissions limit, the bill says.

Ending new leases for fossil fuel will prevent the release of 90% of the potential emissions from Federal fossil fuel, it went on.

The International Energy Agency has declared that two-thirds of the worlds coal, oil and gas reserves must stay in the ground to avoid triggering dangerous and irreversible climate change.

Campaigners estimate up to 450 bn tonnes of coal, oil and gas reserves remain in lands and water under US government control. Already, campaigners estimate, up to 4% of global greenhouse gas emissions generated from those fossil fuel mined in US public lands and water. Extracting and burning those reserves undermine Obamas efforts to avoid that climate-altered future.

We need to drive this understanding that for us to be good stewards of our planet, we must keep in the ground the vast majority of fossil fuel reserves, Merkley told reporters on a conference call on Tuesday.

The initiative adds to growing pressure on the Obama administration from campaigners to do more to fight climate change on its own turf.

In an open letter last September, more than 400 campaign groups called on Obama to stop the sale of new oil and gas leases on public lands.

Over the past decade, the burning of fossil fuel from federal leasing has resulted in nearly a quarter of all US energy-related emissions and nearly 4 per cent of global emissions, the letter told. Despite this pollution and the looming climate menace, your administration continues to lease publicly owned fossil fuel, imperiling the health and welfare of communities and the planet.

Obama has made some small steps to limit fossil fuel production in lands and water under his governments control. The administration last month cut off the prospects for future petroleum drilling in Arctic water, cancelling two petroleum lease auctions and turning down requests from Shell and other companies for more day on their existing leases.

Wednesdays initiative has almost no chance of becoming statute. But it achieves two important goals for environmental campaigners: underscoring Obamas reluctance to tackle the supply side of climate change; and keeping climate change on the political agenda ahead of next years presidential elections.

Sanders support for the bill solidifies the Democratic presidential challengers reputation as one of the greenest members of the Senate and once again puts him out ahead of Clinton in supporting strong action on climate change. Sanders was an early foe of the Keystone XL pipeline and Arctic drilling, forcing Clinton to shifting her postures on both issues in the last few months.

Obama has won widespread kudo from campaigners for his efforts to fight climate change anchored by his plan to cut carbon pollution from power plants, the biggest single source of greenhouse gas emissions. But there is growing frustration that Obama has focused his measures so far on smokestack emissions rather than heading off the use of fossil fuel at the source, such as restricting mining leases on government lands.

President Obama has done more than any president in past to tackle climate change but the bills coming out of the administration have been focused on tail pipes and power plants. They havent been addressing the source of the emissions. But this bill would put pressure on the administration to focus on keeping fossil fuel in the grounds instead of digging them up in the first place, told Marissa Knodel, climate campaigner from Friends of the Earth.

Democratic party operatives meanwhile exhibit growing confidence that climate change will emerge as an important wedge issue in the 2016 general elections, casting their Republican opponents as anti-science and detached from reality because of their refusal to acknowledge the existence of climate change or deal with its consequences.