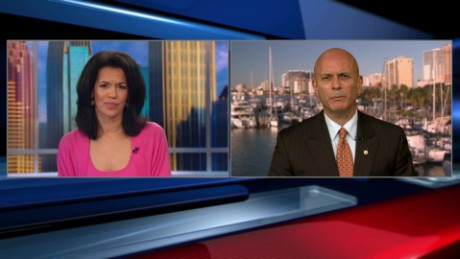 In a press release, the Canova campaign said that it raised more than $225,000 from an email sent over the weekend by the Sanders’ campaign to his list of supporters, a highly coveted and extensive network of voters nationwide. The Canova campaign also said that another $65,000 in small dollar donations poured into his coffers for the South Florida Democratic primary in late August.
Like the Sanders campaign, Canova’s average contribution is low: a mere $17.63 on average was donated over the weekend.
The fundraising email from the Sanders campaign called for a $2.70 donation to be split between Sanders and Canova, a riff on the average $27 donation that fuels the Sanders campaign.
“The political revolution is not just about electing a president, sisters and brothers. We need a Congress with members who believe, like Bernie, that we cannot change a corrupt system by taking its money,” the email said.
Sanders told Jake Tapper on Sunday’s “State of the Union,” “Well, clearly, I favor her opponent. His views are much closer to mine than” Wasserman Schultz’s.
Sanders went on to say that if elected president, he would not reappoint Wasserman Schultz head of the DNC.