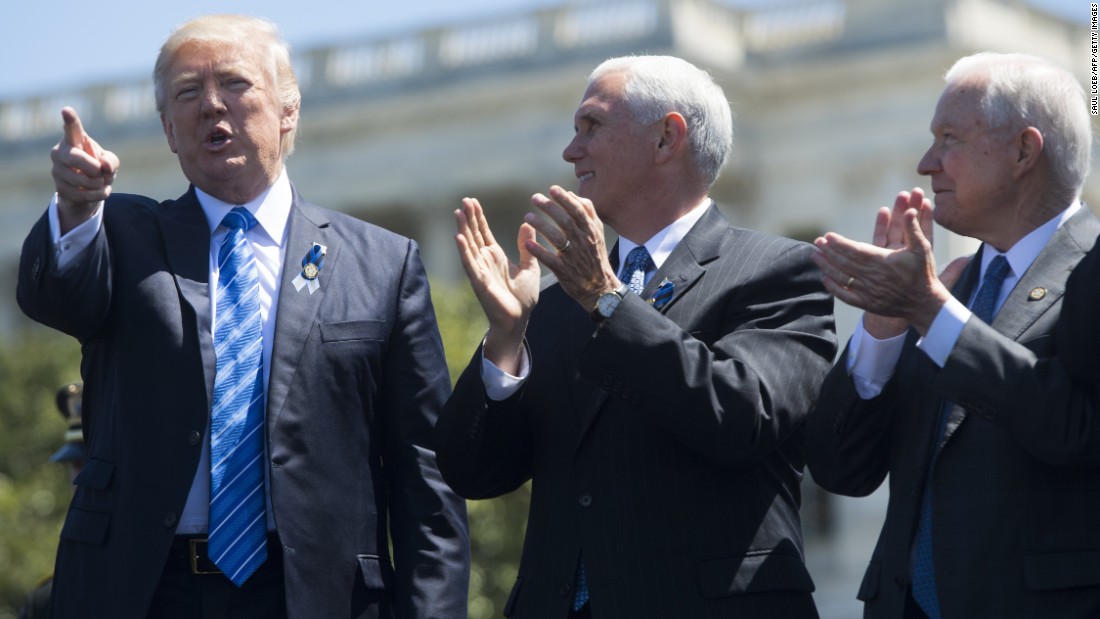 (CNN)Attorney General Jeff Sessions and deputy Attorney General Rod Rosenstein have interviewed multiple candidates for FBI director, according to sources familiar with the process who described the hour-long interview sessions as professional and business-like.

The firing of FBI Director James Comey and Russia were not raised in the interviews, sources say. The meetings focused on the FBI, issues of concern such as terror threats and cybersecurity, and especially combating violent crime in America.
The Justice Department leaders did not ask candidates if they will promise to do the political will of President Donald Trump or for a pledge of loyalty to the President, according to one source who said, “Definitely not. And it’s fortunate they did not ask for that.”
Sessions updated Trump on the progress Monday night.
Most of the interviews took place last Saturday at the Justice Department, following a tumultuous week with Comey’s firing. Sources say, not surprisingly, Sessions and Rosenstein appeared exhausted.
A Justice Department spokesperson declined to comment for this story.
In recent days, Trump has also asked about 75-year-old former New York Police Department Commissioner Ray Kelly as a possible FBI director, a source told CNN. The source said the President asked him about Kelly, who was not one of the eight candidates Sessions and Rosenstein interviewed at the Justice Department on Saturday. The source said he told the President he was concerned Kelly lacked federal experience.
Andrew McCabe will likely remain acting director until a permanent director is nominated, according to one source familiar with the process.
Earlier Tuesday, Sen. Jon Cornyn, who was interviewed over the weekend by Sessions and Rosenstein, announced he was withdrawing his name from consideration.
“Now more than ever, the country needs a well-credentialed, independent FBI director,” Cornyn said in a statement. “I’ve informed the administration that I’m committed to helping them find such an individual, and that the best way I can serve is continuing to fight for a conservative agenda in the US Senate.”
The process could be completed by the end of the week, said one source, with the President likely interviewing the top contenders. Another source, however, said the process may take longer as Justice officials are making calls to people outside of the reported list of candidates for FBI director.
As Sessions and Rosenstein met with candidates over the weekend, officials — including Rosenstein — also phoned other candidates not on the list. One source said the fact that the Justice Department is seeking additional names may indicate they are not satisfied with the current list of candidates and not sold on anyone on the list. The source adds, however, that the two men are feeling “a sense of great pressure” to identify a candidate as they try to meet the President’s expectation of naming someone by Friday.
Current and former FBI officials say in the wake of Comey’s sudden firing, the 10-year tenure that comes with the director’s job and is meant to insulate the director from political pressure is now meaningless.
“Whoever becomes director, no matter how independent and honest, they will be operating with the knowledge that this president will not hesitate to fire you if he doesn’t like your performance, for any reason,” one source said. “You can expect to be tossed like an old shoe — with a dose of humiliation.”