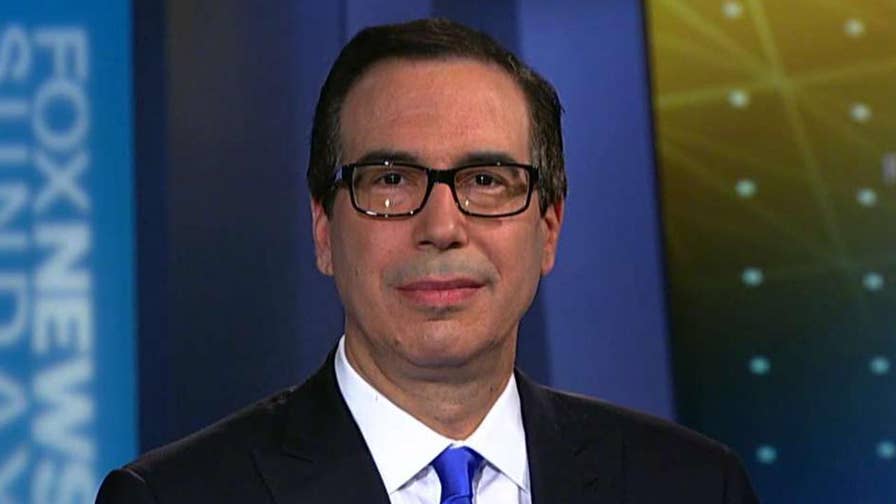 Treasury secretary weighs in on President Trump’s tariffs, threats of a trade war and drops in the stock market.

“Roseanne” is back on the air with smashing ratings. “Ready Player One,” is on the big screen. It’s an homage to ‘80s video games. 1980s cinema virtuoso sprinkles the film with Easter eggs from the decade. And the Republican Party is back touting a constitutional balanced budget amendment and a line-item veto for the president of the United States.

All that’s missing are Bonnie Tyler and Alf.

President Trump was apoplectic when Congress delivered a $1.3 trillion spending bill to his desk to avert a government shutdown last week. He immediately called for a balanced budget amendment and a line-item veto.

A balanced budget amendment is just that. It requires the government to spend no more than it takes in every year. You’ve heard of sequestration, the mandatory set of spending caps Congress imposed on itself in 2011?

A balanced budget requirement would be sequestration amped up on a cocktail of anabolic steroids and fiscal fentanyl. And, Congress and the states would have to change the Constitution to impose such discipline.

Most government chief executives, be they governors or the U.S. president, love the idea of the line-item veto. The concept poaches power from the legislative branch and fortifies the arsenal of the executive.

It’s clear why Trump wants both a balanced budget amendment and a line-item veto.

The massive, omnibus spending bill Congress sent him earlier this month was messy and inelegant. Most big spending bills are. Trump didn’t like the price tag.

And it’s great politics to push to “balance the budget.” The president would love a line-item veto, canceling Democratic priorities included in the spending package while maintaining GOP initiatives.

The balanced budget amendment and line-item veto ideas caught fire politically in the 1980s. But to think that Trump has a reasonable chance at securing either tool appears folly.

Start with the balanced budget amendment.

It takes a Herculean task to execute a Constitutional amendment. But the consequences of a balanced budget amendment are even starker.

That big defense increase the president trumpeted? Wiped out. Accounting for more than 50 percent of all discretionary spending (annual appropriations designated by Congress), the Pentagon has the most to lose.

If you are going to slash spending to comply with a balanced budget amendment, sure, you can pare back spending for the departments of Interior or Education. But the money allocated there represents a sliver of what the military receives. So the Pentagon will bear much of this burden.

Then there are entitlements: Medicare, Medicaid and Social Security. We mentioned “discretionary spending?” That accounts for only about 30 percent of all federal spending.

The government devotes the rest to entitlements. Remember the Mariana Trench and Challenger Deep? Those chasms may be the only places on Earth Republicans could find sanctuary from the angry mobs of citizens outraged that they lost their Medicare.

Republicans long advocated reasserting the power of the legislative branch to combat purported executive branch abuses carried out by former President Barack Obama. The Constitution grants Congress the ultimate power of the purse under Article I, Sections 7 & 9. A balanced budget amendment would strip some of that authority from lawmakers.

The House plans a vote in the coming weeks on a balanced budget amendment. It may be fabulous politics. But the operational realities are impractical.

Never mind that lawmakers approved a broad, two-year budget framework that sets spending outlines in February. A vote on a balanced budget amendment flies in the face of that accord. In this instance, such an amendment is nothing more than a weaponized, roll call vote to be deployed against political foes.

It’s incongruous to vote for a balanced budget amendment, the spending deal last week and the February agreement. Yet some Republicans may try to say otherwise.

Now to the line item veto.

Treasury Secretary Steve Mnuchin badly botched the method to impose a line-item veto. During an appearance on “Fox News Sunday,” Mnuchin argued that it would simply take Congress “to pass a rule,” and, voila, the president could nullify individual provisions in legislation sent to him by Congress.

In fact, the introduction of a line-item veto may also entail a constitutional amendment.

But in the 1998 decision Clinton v. New York, the Supreme Court ruled the gambit unconstitutional. One issue is transferring the “power of the purse” from the legislature to the executive branch as dictated under Article 1, Sections 7 & 9.

In other words, the Constitution affords Congress direct legislative authority under Article I. If the president doesn’t like what Congress “presents” him, it’s take it or leave it. The President can’t take “some of it” or “leave some of it.”

Thus, line-item veto advocates would have to amend the Constitution. Don’t forget how congressional Republicans were worked up about exercising their legislative prerogatives as laid out in Article I. Congress would relinquish substantial power to the executive branch under a line-item veto.

Neither the balanced budget amendment nor the line-item veto are new ideas. They gained currency in the 1980s. President Trump wants both instruments at his disposal. But these gambits may require amendments to the Constitution.

They want their ‘80s back

For changes of this magnitude, perhaps they should have started in 1780s.