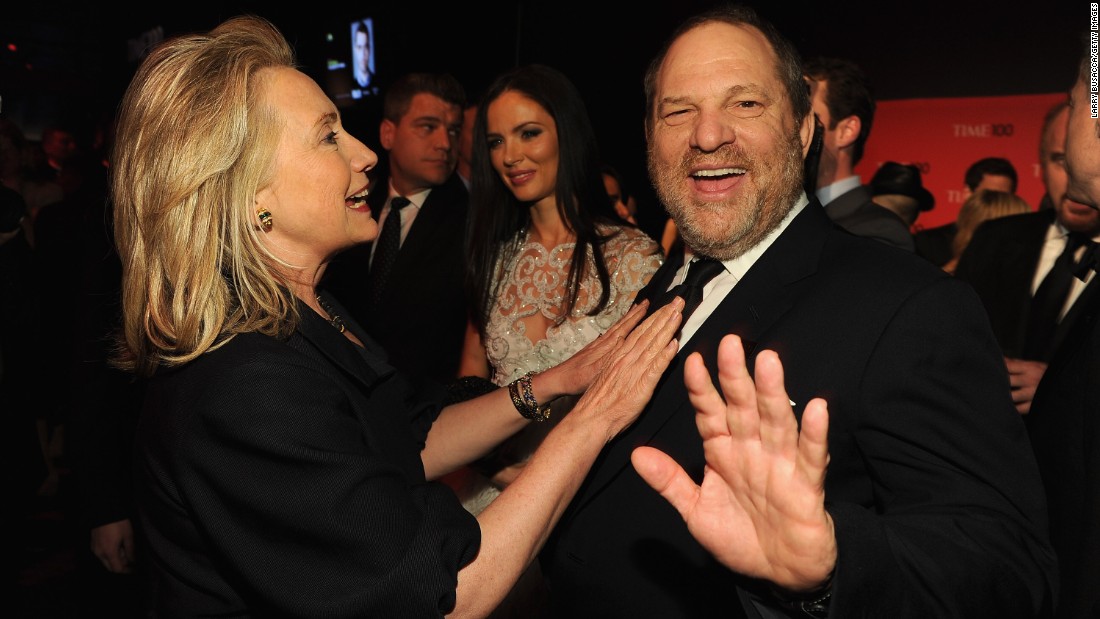 But former Democratic Presidents Barack Obama and Bill Clinton, as well as former Secretary of State Hillary Clinton — all of whom have longstanding ties to Weinstein, a major Democratic Party fundraiser — have not publicly addressed the accusations.
Representatives for the Clintons have not responded to comment for this story, and Obama’s office declined to comment.
The recent report in The New York Times cataloged accusations of sexual harassment against the filmmaker that spanned three decades. Three days after the report, Weinstein was fired by the company he co-founded.
Longtime Hillary Clinton aides have been confused by the former secretary of state’s silence on the issue, questioning — in private — why she has not weighed in at all.
Weinstein has long been a Clinton donor with ties to the political family. Weinstein was one of many from Hollywood who donated to Bill Clinton’s legal defense fund in the 1990s, a Washington Post report from the time stated. More recently, the Clintons rented a home next to Weinstein in the Hamptons in 2015, and Weinstein served as a connector between Hollywood stars and Hillary Clinton’s 2016 campaign.
Weinstein raised about $1.5 million from 1990-2016, according to data from the campaign finance-tracking Center for Responsive Politics, and was a bundler for Clinton’s 2016 effort, including at a star-studded fundraiser for Clinton in June 2016 at Weinstein’s Manhattan home.
Clinton personally headlined multiple fundraisers Weinstein was involved in organizing during the campaign.
CRP’s OpenSecrets website shows Weinstein was a bundler for Obama as well, and the Hollywood giant visited the White House on several occasions during Obama’s tenure. At a White House event for student films in 2013, first lady Michelle Obama credited Weinstein for making the event happen and praised him as a wonderful person and a good friend.
Former Vice President Joe Biden, who has been outspoken on the issue of sexual assault, also has not appeared to make any public statements about Weinstein since the report came out, and the Biden Foundation did not immediately respond to CNN’s request for comment.
Several Democrats announced their intention to return donations received from Weinstein or donate them to charity in the wake of the Times report. But as a bundler, much of his work for campaigns was gathering up donations from others into large sums — making potentially returning Weinstein’s donations more complicated for politicians like Clinton and Obama.

An editorial from The New York Times on Friday implored the Clintons and Obama to disavow Weinstein, calling on Democrats to make sure his status as a major party donor would not prevent anyone from speaking out.
Some Republicans have seized on the Weinstein report and his ties to the Democratic Party.
Republican National Committee Chairwoman Ronna Romney McDaniel said in an interview with CNN’s Wolf Blitzer on Monday that Clinton’s “silence is deafening.”
“I applaud the Democrats who are giving back that money,” McDaniel said. “All of us should be speaking out against a sexual predator like Harvey Weinstein.”
McDaniel pushed back, however, on any comparison of Weinstein and President Donald Trump, whom multiple women have accused of harassment and was infamously recorded by Access Hollywood saying he could grab women by their genitals.
“It’s not even comparable,” McDaniel said, citing the reported settlements Weinstein had come to with women who had accused him, saying Trump “didn’t have eight settlements.”
After the Access Hollywood tape came out, Trump dismissed his comments as “locker room talk.”
Trump also was counseled by Roger Ailes during the 2016 campaign and before the Fox News chief’s death. Ailes left the conservative network following revelations that he harassed female Fox staffers.
Many Democrats have also called on their colleagues to repudiate Weinstein.
Connecticut Sen. Chris Murphy said in a CNN interview on Sunday that Democrats should give any money they received from Weinstein back.
“I mean this is a pretty bad guy who did some really awful things,” Murphy said.
Since her electoral defeat last November, Hillary Clinton has been outspoken on a range of issues, and during her presidential campaign she went after Trump for allegations of sexual assault.
Bill Clinton has been plagued by allegations of sexual harassment and assault throughout his own political career.
In December 2015, Hillary Clinton was asked about some of the accusations and her own assertions that victims who allege assault should be believed. In the context of allegations against her husband, Clinton said, “I would say that everyone should be believed at first until they are disbelieved based on evidence.”
Obama has largely shied away from the public eye since leaving office, apart from delivering a few speeches and issuing statements in response to Trump administration moves on areas like climate change and the Deferred Action for Childhood Arrivals program.