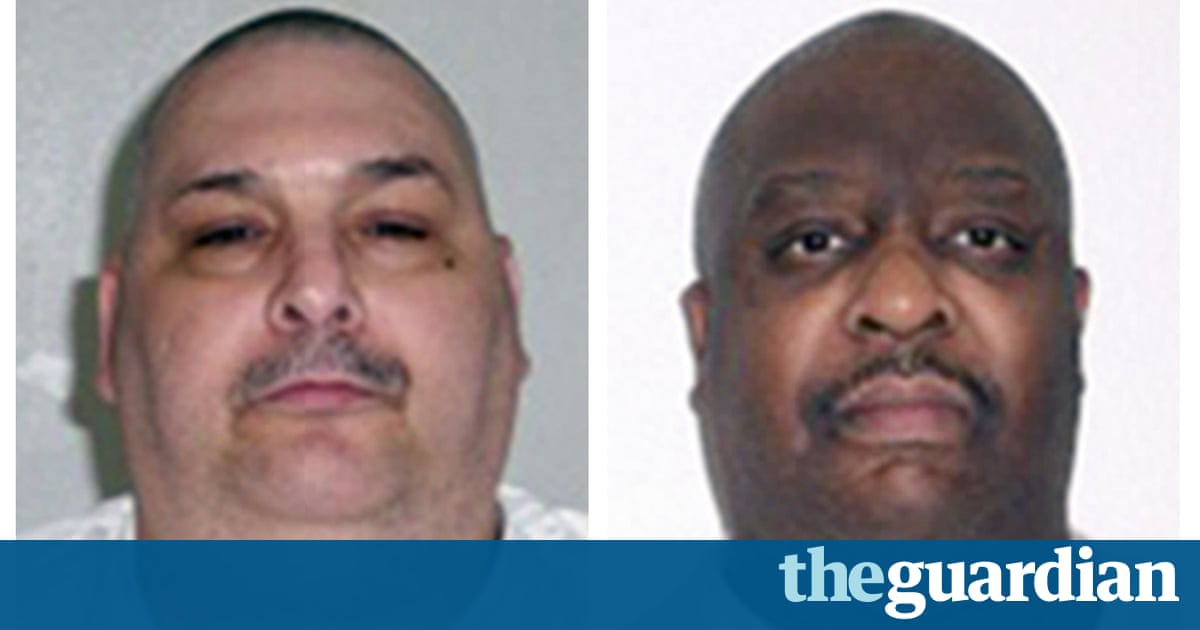 The first double execution to take place in the US in 16 years was carried out by Arkansas on Monday night amid a fierce dispute over whether the prisoners were subjected to a botched procedure amounting to cruel and unusual punishment.

In dramatic events that erupted a little over an hour after the first prisoner, Jack Jones, was put to death, a federal judge stepped in and temporarily stayed the lethal injection of the second, Marcel Williams, on grounds that Joness execution might have been unconstitutional. In frantic legal wrestling, the state conceded that it had spent some time trying to insert an IV line into Joness neck, but had failed in the endeavour.

The deputy solicitor general, Nicholas Bronni, admitted in a court filing that the execution team had tried to place a central line in Jones neck, but the attempt was unsuccessful.

Lawyers representing Williams instantly protested to the courts that it had taken 45 minutes for the execution team to find a vein into which they could inject the lethal cocktail into Jones. The attorneys warned that their client was obese, weighing 400 pounds, and that would render finding his veins even more difficult than his fellow death row inmate.

Three media witnesses were allowed in to see both executions. But the value of their testimony was limited in one crucial regard: they were only permitted to enter the death chamber after the IV lines had been placed into the each prisoners veins, which means that there is no independent verification of whether or not the early stages of the death protocol were botched.

The double execution in Arkansas, carried out about three hours apart, marks something of a departure for the death penalty in both the state and the US. Until this month, Arkansas had not executed anyone for 12 years and nationally capital punishment has been markedly declining, with only 20 executions last year, the lowest number since 1991.

The Republican governor of Arkansas, Asa Hutchinson, decided to buck this downward trend by announcing that he would schedule eight killings in 11 days, in order to use up a batch of the sedative midazolam that was expiring at the end of this month. Had all the executions taken place, it would have been the largest mass execution in the US for more than 50 years.

In the end, though, the state found itself up against formidable legal challenges brought by lawyers for the inmates and four of the eight were spared immediate death as a result of stays imposed by the courts.

One prisoner, Ledell Lee, was killed last Thursday night in an execution that lasted 12 minutes. The final execution is scheduled for Thursday.

Joness execution began after a long day of legal challenges involving both state and federal courts. His lawyers presented evidence to judges that he had a long history of abuse and mental illness including two suicide attempts and recurring depression.

The prisoner, who had spent more than two decades on death row, had been pushed into the death chamber in a wheelchair having had one leg amputated as a result of diabetes.

His lawyers had expressed anxiety before the execution went ahead that the multiple drugs the prisoner is on for the condition could impair the effect of the sedative midazolam, the first chemical in the states triple lethal cocktail.

Jones, 52, was sentenced to death for the 1995 rape and killing of Mary Phillips. He strangled the bookkeeper with the cord to a coffee pot while her 11-year-old daughter, Lacey, who survived, was in the room.

Shortly before the lethal injections were administered, Jones read out a lengthy statement in which he said: Im so sorry Lacey. Try to understand I love you like my child.

After the execution was completed, the victims daughter, now Lacey Seal, released her own comments. Im so glad its done. Im glad that part of my life, that chapter, is closed, she said.

It might take some time for the precise events involved in Joness execution to be clarified. Both state officials and the condemned mans lawyers agree that there was difficulty finding a vein, but just how long it took and what were the consequences remain a matter of dispute.

An eyewitness account by Associated Press recorded that the lethal injections began at 7.06pm local time but he continued to show signs of breathing, with his chest rising, until 7.11pm. Consciousness tests were done at 7.13pm including lifting his eyelids and rubbing his sternum but there was no sign of movement and at 7.20pm he was declared dead by a coroner.

Williamss execution was started with the injection of midazolam, according to media witnesses, at 10.16pm. After that he was seen to take many heavy breaths.

An initial check for consciousness was made at 10.21pm, but three minutes later the prisoner was seen to move back in the gurney. Further checks were made at 10.25pm and 10.27pm, but there were no other evident movements and he was pronounced dead at 10.33pm.

After Williamss execution, Governor Hutchinson said in a statement: This is a serious and reflective time in our state and it is important for the family of [his victim] Stacy Errickson and all Arkansans to know that in this case our laws ended in justice.

Hutchinson also responded to news of the death of Jones: This evening the rule of law was upheld when the sentence of the jury for Jack Jones was carried out after 20 years of review. The victims family has waited patiently for justice during that time. A governor never asks for this responsibility, but I accept it as part of the solemn pledge I made to uphold the law.

Williams, 46, was sent to death row for the 1994 rape and killing of 22-year-old Stacy Errickson, whom he kidnapped from a gas station in central Arkansas. Authorities said he abducted and raped two other women before he was arrested over Erricksons death. Williams admitted responsibility to the state parole board last month.

I wish I could take it back, but I cant, he said.

In the hours leading up to the second execution, Williamss lawyers had battled to persuade judges in both state and federal courts that mitigating circumstances relating to his childhood had never been presented to the jury at his sentencing trial that could have spared his life. The attorneys presented disturbing details of the abuse he had suffered as a child at the hands of his own mother Sarah. She beat him with belt buckles, switches and extension cords, at times waking him up in order to pummel him.

His mother also arranged for him to be sexually abused from the age of 10 by multiple other women aged in their 20s to 40s. The women paid to abuse him in food stamps or by covering the familys electricity bills.

Jacob Rosenberg is a reporter with the Arkansas Times