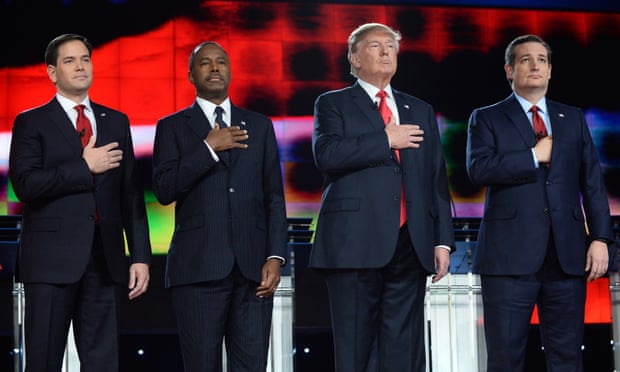 Carpet-bombed cities, world war three and internet blockades were among the images conjured up by Republican candidates for president on Tuesday night, as the hopefuls took bellicose rhetoric to new heights over the inconveniences of law and fact.

Senator Ted Cruz struck arguably the most overtly belligerent tone of all the candidates, backtracking only slightly from his promise to carpet bomb Islamic State militants wherever they are. On Tuesday, he said he would carpet bomb where Isis is, not a city, but the location of troops with directed air power.

The object isnt to level a city. The object is to kill the Isis terrorists, he said, only a slight departure from his campaign promise to bomb them into oblivion.

I dont know if sand can glow in the dark, he told a rally in early December, but were going to find out!

Because Isis largely embeds in cities with the civilian population that it claims to rule, Cruzs plan would by definition entail wholesale bombing of places where hundreds of thousands of people many the victims of Isis crimes themselves live.

During the debate, Cruz compared his notion of carpet bombing to the US strategy in the first Iraq war, when the US launched about 1,000 airstrikes a day. Pentagon leaders past and present have noted that those air strikes, which relied on precision missile technology and targeted a traditional military, were not a carpet-bomb campaign like the one the US unsuccessfully carried out in Vietnam in 1972.

Testifying before the Senate last week, Gen Paul Selva, vice-chairman of the joint chiefs of staff, said Cruzs proposal is not the way that we apply force in combat. It isnt now nor will it ever be.

The first Iraq war also left dictator Saddam Hussein in power, despite his defeat, an end that no presidential candidate has suggested would be acceptable for the leaders of Isis. Cruz did say, however, that he prefers dictators, such as Egypts deposed Hosni Mubarak and Libyas now-deceased Muammar Gaddafi, to the unpredictable revolutionaries who followed them.

He claimed that Gaddafi assisted the US in fighting terrorism, even though he was designated the leader of a state sponsor of terrorism for decades. Chris Christie similarly said he sided with autocrats, name-dropping his friend King Hussein of Jordan a monarch dead 16 years and the father of current King Abdullah.

Cruzs repeated promises to hunt down and utterly destroy terrorists made him the most explicitly aggressive candidate on Tuesday night, but even he did not express nonchalance about killing civilians, as Donald Trump and Ben Carson did.

Earlier this month, Trump said the US should take out the families of militants to deter terrorism. On Tuesday he repeated his rationale for killing civilians: I would be very, very firm with families. Frankly, that will make people think because they may not care much about their lives, but they do care, believe it or not, about their families lives.

Carson, a retired neurosurgeon, compared the strategy of indiscriminate force to the process of opening up a childs head to remove a tumor.

You have to be able to look at the big picture and understand that its actually merciful if you go ahead and finish the job, he said, rather than death by 1,000 pricks.

Asked by the moderator whether he was OK with the deaths of thousands of innocent children and civilians, Carson replied: You got it. You got it.

The Geneva Conventions prohibit indiscriminate attacks, including aerial bombardment; the US and most of the worlds nations are signatories to the conventions, although the US has not signed on to all provisions and has tried to interpret the rules to its advantage.

In October, a US warplane bombed a civilian hospital in Afghanistan, raising prospects of a war crime inquiry over the apparent accident. A bombing campaign as prescribed by Cruz, Carson or Trump would at best have questionable legality, make the US an international pariah and exacerbate the refugee crisis.

If you are going to kill the families of terrorists, realize that theres something called the Geneva Convention were going to have to pull out of, Senator Rand Paul pointed out to his rivals. It would defy every norm that is America.

Candidates were not only insouciant about human rights abroad; they also felt comfortable doubting rights enshrined by US law.

Youre going to be treated as an enemy combatant, Rubio said, a member of an army attacking this country.

Rubios threat recalls the controversial drone strike that killed American Anwar al-Awlaki, an al-Qaida leader, in Yemen in 2011. The ACLU sued the US government over that strike, and any policy that would strip Americans of rights in the US would almost certainly face challenges, if not outright rejection, from the courts.

Rubio, Chris Christie and others also support expanded surveillance powers for the NSA and FBI a proposal that has already, at least in part, been ruled illegal in court. Bulk collection of phone and internet records raises a slew of constitutional questions, all of which are pet peeves for the libertarian-leaning Paul.

Trump went further, suggesting the US should penetrate the internet and block sections of it to stop Isis recruitment.

I would certainly be open to closing areas where we are at war with somebody, he said. I sure as hell dont want to let people that want to kill us and kill our nation use our internet.

Paul quickly raised first amendment speech rights, arguing that Trumps idea amounts to censorship. Are you going to change the constitution? he asked.

Trump also said Isis was using the internet better than we are … and it was our idea. It was in fact Sir Tim Berners-Lee, a Briton, who invented the world wide web.

Paul also repeatedly accused his rivals of pushing the US toward a third world war, and relative moderates, like Jeb Bush and John Kasich, called their opponents cartoonish and unrealistic to no avail. The tone that won the debate was aggressive from start to finish, and candidates ended by taking aim at political correctness itself.

Christie called the president a feckless weakling, Bush named Trump a chaos candidate, Carson demanded we get rid of all this PC stuff, and Cruz claimed political correctness is killing people.

The Obama administration, like a lot of folks here, he said, want to search everyones cellphones and e-mails and not focus on the bad guys.

Cruz did not elaborate on how authorities would have noticed the pseudonymous Facebook post of a San Bernardino attacker, or the public call to jihad of one of the Boston Marathon bombers, if only they had not worried about offending someone.

Instead the senator changed the subject, to a simpler question of language. One of the things weve seen here is how easy it is for Barack Obama and Hillary Clinton to get distracted from dealing with radical Islamic terrorism, he said. They wont even call it by its name.