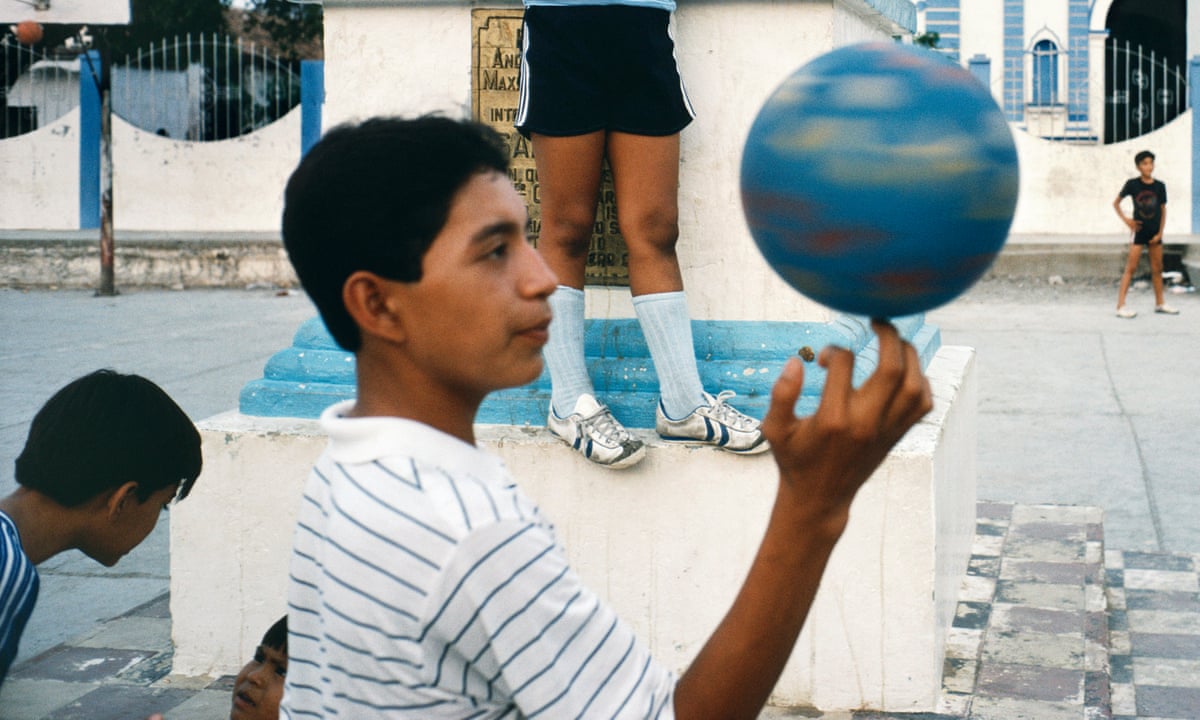 In 1975, when I was 23, I reached a dead end in my photography. I had been photographing the American landscape in black and white, taking ironic, alienated pictures of supermarket parking lots and strip malls. The work wasnt going anywhere; it wasnt expansive or resonant. So I began casting around for a new direction.

Graham Greenes The Lawless Roadspiqued my interest in Mexico. I took this photograph in Tehuantepec, in the south of the country, in the early 80s. I simply wandered, allowing my experiences with the camera to lead me forward. It was a heavy, muggy afternoon as I came into a white-blue plaza. I was feeling hot, a little uninspired and a little lost, when I caught sight of some children with a ball. As I moved closer, one of the boys spun the ball on his fingertip, and I sensed the shapes of the children, the blue stripes behind, and the blue of the ball, and took a few frames. Then the moment was gone.

I never know when a picture will work. With this one, I was hopeful but uncertain. The slow shutter speed that I used made the ball look like a spinning globe; the image took on a whole other dimension that I was unaware of when I took it. I love the notion that this boy in a little town in southern Mexico seems to have the world spinning on his fingertip. It wasnt until later that I realised there was a second ball in the frame: a basketball falling through a hoop. This kind of photography wandering the streets, exploring the world with few preconceptions is so much about immediacy, intuition and serendipity. Rational understanding takes a back seat and the unconscious takes over.

I learned photography when I was 10 from my father, who took pictures as a way to deal with writers block. There are echoes in my work of paintings that I saw as a child ones by De Chirico and Braque and the writers I read as I grew older, like Graham Greene, Conrad and Gabriel Garca Mrquez. But what ultimately drew me to photography was its direct, very complicated, relationship with the physical world. Confronting and interpreting the chaos and complexity of the world works better for me than dealing with a blank canvas. I believe in taking photographs that ask questions and do not purport to provide answers.

In Mexico, I was particularly drawn to the border. Back in the 1970s and 80s this was a more porous place. Crossings were often funny and absurd. Once, I and the journalist I was with, Tom Miller, were taken into custody as we zigzagged across the border. Handing the Mexican officials our passports with $20 bills inserted and proposing we buy them dinner seemed to do the trick. We had a friendly meal of take-out tacos in the immigration office.

Working at the border helped to transform me into a colour photographer: life here seems to be lived vibrantly on the stoop and in the street, very different from the grey-brown reticence of New England where I am from. I always remember this line from The Lawless Roads: Life is never going to be quite the same again after your passport has been stamped and you find yourself speechless among the money-changers.