Finding the right actor or actress can be difficult. Our greatest scientists managed to partially solve this problem when they invented Matt Damon to fit any open role, but even he is just one synthetic android. And when the best option is finally found, there is always the chance that they might not end up being there when you need them. By 2020, every performer will be Matt Damon, but until production gets on schedule, we just have to deal with humans being flighty, mortal things.

And, sometimes, we deal with this issue in insane ways that no non-Hollywood person would come up with. But that’s the beauty of making films: When you have a problem, the best thing to do is make more problems.

#5. Batman Returns Had A Catwoman Robot

Let me ask you people a question: You’re nearly finished shooting the greatest superhero film of all time, Batman Returns. However, you suddenly get the order that you need to insert a shot that lets audiences know that Catwoman doesn’t get fried along with Christopher Walken but, in fact, survives and is remarkably intact for someone that was last seen being simultaneously electrocuted and charbroiled. 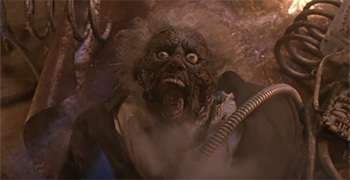 It’s pretty hard to come back from being charbroiled.

The shot will consist of a silent Gotham City being suddenly topped with the Bat Signal, followed by the back of Catwoman’s head rising into frame. Michelle Pfeiffer is unavailable, because she’s too busy bathing in the virgin blood that has kept her from aging since 1984. What do you do? Again, all you see is the back of a head, covered by a Catwoman mask. What logical method do you use?

I bet your answer is to find a body double, put the top half of a Catwoman costume on her, and collect your paycheck. But that answer just illustrates why you’re not working in the movie industry, dummies. Finding a body double is Plan B, at best. Plan A is to build a robot Catwoman. Jeez, guys. Keep up. 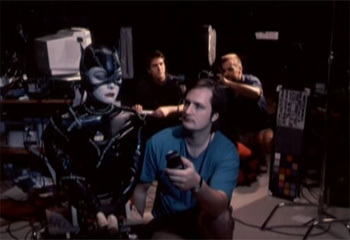 Faced with the task of bringing a Tim Burton sketch to life, the Batman Returns special effects team immediately went to work building an animatronic Catwoman torso and head. Some people, when they decide to boldly reject sanity, end up doing things like punching bouncers or self-publishing their short stories. When you’re working on Batman Returns, a movie that is 90 percent about costumed characters trying to bang each other, I guess this sudden craze manifests itself in “No, we build a fucking robot, because that’s what humans do. I haven’t seen the sun in a year.”

The shot would eventually cost $250,000 to complete, and the robot would end up being replaced by an actual double, because, as you can see, it moves like a leather-bound periscope.

Skip to 0:18 for another case of robots taking American jobs.

The best part about all of this is the fact that no one who worked on the Catbot seems to show any kind of hindsight. There is no admittance of “Yeah, that was strange” or “Maybe we should’ve gone with an actual person first, seeing as we’re not Terminators.” They all treat it as if that robot was an average part of their day, a part with the same kind of inevitability as putting on clothes or brushing your teeth. Michael Keaton didn’t sign on for Batman Forever, but it’s probably not because he had issues with the script. It’s probably because he got a memo that said “Very glad to be working with you, Michael. Now go meet MechaKeaton. He’ll be doing all of your scenes.” 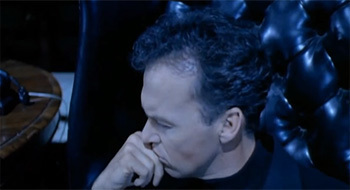 We can make him better than he was. Stronger, faster, broodier.

Plan 9 From Outer Space, like all movies that are terrible and wonderful in equal measure, is a movie that cannot be described. Aliens threaten humans by promising to unleash zombies on them in a plot to rescue mankind from itself, and it’s impossible to retell any more without sounding like I’m making at least half of it up. Remember when you were little, and you were too young to follow movies properly, so instead of being coherent things, they just ended up as jumbled piles of madness in the back of your mind? Plan 9 is like that every time you watch it. 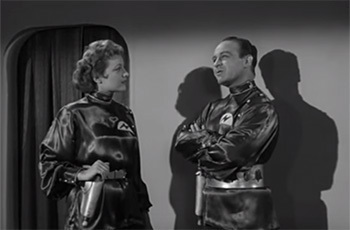 Also, there isn’t a shirt in this movie that I don’t want.

The director, Ed Wood, was very close with Bela Lugosi, who mainstream movie fans remember from Dracula, and horror movie buffs remember from every bad thing in the late ’30s, ’40s, and ’50s. From The Devil Bat to Bela Lugosi Meets A Brooklyn Gorilla, Lugosi was a comforting hand on the shoulder of everyone who ever asked themselves, “What and why is this movie?” during that time period. And then, in 1956, he passed away, leaving a used-vampire-cape-sized hole in Hollywood. But that wouldn’t stop Ed Wood, the patron saint of never wanting a second take, from putting him in movies. 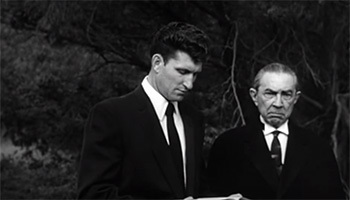 That’s Bela on the right, very sad about the next two paragraphs.

Ed Wood had filmed bits and pieces of other movies with Bela, and when he finally got around to Plan 9, he decided that it would make for a great final tribute to his friend. This idea was complicated by the fact that he didn’t really have enough footage of Bela for a role to actually make sense. It was mostly Bela doing a few totally unrelated things, and Ed Wood did his best to try to make it make sense. Luckily for us, Ed Wood tried to make things make sense in the exact same way that he did everything else, resulting in a beautiful implosion of weirdness.

Ed Wood hired Tom Mason, a chiropractor, to fill in the blanks. Wood didn’t pick this guy out because of his stunning resemblance to Lugosi. Mason was noticeably taller than Bela and very noticeably not Bela if you looked anywhere near his face. To compensate for the discrepancy that occurs when you cover up an actor’s death by hiring someone that was wrong for the role in nearly every way, Wood had Mason hold his cape up in front of his face every time he showed up. 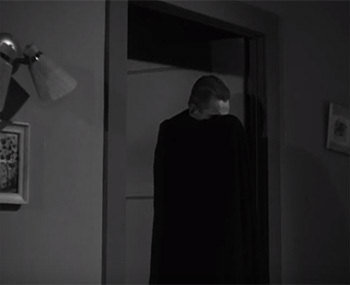 “Please don’t tell my friends about this.”

Since I’m not Ed Wood, I can’t tell you with any certainty whether this is the laziest or most brilliant thing ever. The character’s called “Ghoul Man,” so why wouldn’t he want to hide his face? Dammit, Ed, you baffling little gem.

Peter Sellers, the star of things like Dr. Strangelove, Being There, and the Pink Panther films, died in 1980. Trail Of The Pink Panther, the seventh film in the series, was released in 1982. Production of the film started 18 months after Sellers passed, with the idea being that they’d construct Sellers’ role from deleted scenes in prior Pink Panther movies. The people behind the film had 18 months to deliberate on whether or not this was a bad idea, and when you have a year-and-a-half to consider something, it always becomes a bad idea.

“We could dig him up, for all I care. This is paying for my beach house.”

If a ghost farted a 90-second film roll into Ed Wood’s hands, Wood would’ve found a way to turn it into a feature-length science-fiction “epic.” But in the case of the Pink Panther franchise, it was producers putting millions of dollars into a movie that only features Peter Sellers clips that were deemed unfit and cut from their last few multi-million-dollar movies. It couldn’t be a more obvious cash grab if they retitled it Give Us Your Money, You Don’t Want To Make Your Favorite Actor Peter Sellers Sad, Right? of the Pink Panther. 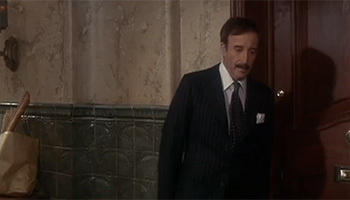 Too late; he’s sad. Insert another dollar bill to cheer him up.

The first half of the movie feels like some kind of awful Inspector Clouseau sketch show that includes a few body doubles. And when Leftovers Of The Pink Panther ends, the character of the Inspector disappears. I don’t want to tell filmmakers how to do their jobs, but if the guy playing your main character has been publicly declared dead for longer than it takes to write this sentence, maybe don’t have his character “disappear.” There’s no better way to tell audiences “We ran out of living actor” than by having a plot where the protagonist abruptly leaves for reasons that are unknown to everyone.

The rest of the film features extended “interviews” with people that knew Clouseau, sequences from prior movies, and scenes of actors portraying a younger Clouseau at different bumbling points of his life. These performances range from “Aw, he’s just a kid” to “Fuck THAT guy.” That latter reaction comes from scenes where a mediocre Clouseau Halloween costume goes to college and then tries to stop some Nazis, and the Clouseau impression you hear sounds like a French accent being performed by a sphincter. 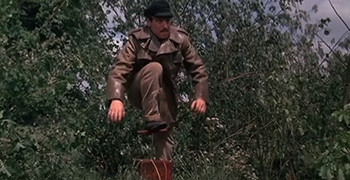 The end of the movie features another body double being shown from behind as a seagull shits on his coat. The double suddenly transforms into the Pink Panther cartoon, and we end up seeing a bunch of clips from other Pink Panther films. You know, clips that were actually approved to be in movies, unlike the clips that you saw an hour ago that were originally deemed not good enough to be in movies. Peter Sellers’ widow ended up winning over a million dollars in a lawsuit against the studio, since Trail Of The Pink Panther had been a drunken autopsy of Sellers’ whole career.

Bye, everyone. Happiness is a myth.