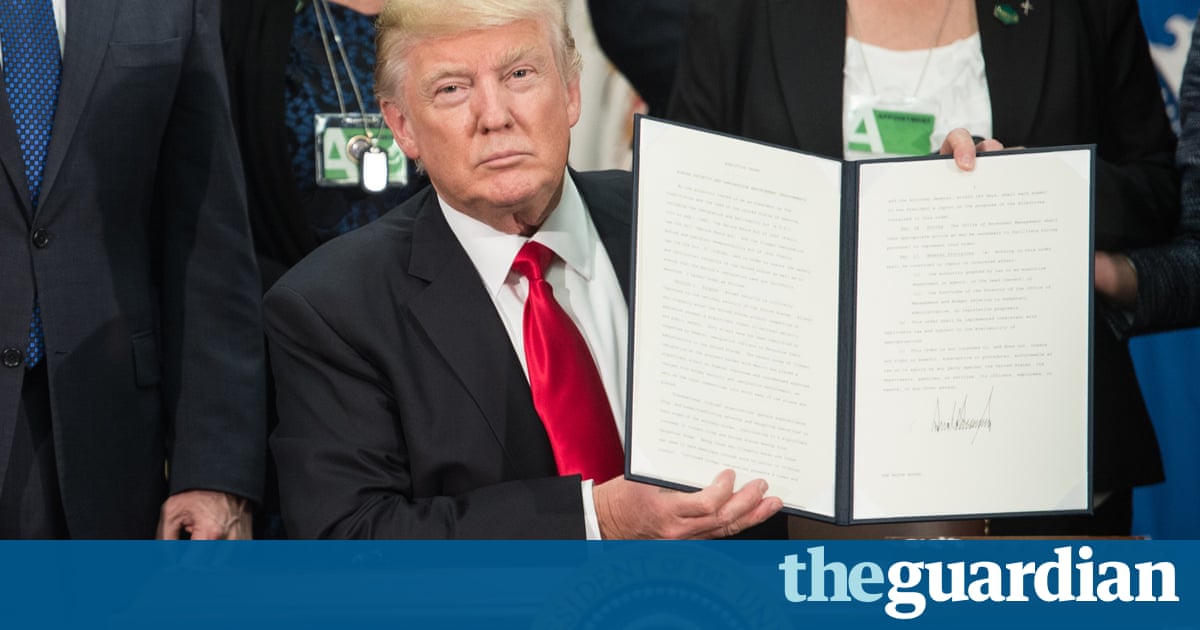 Donald Trump took 14 official presidential actions in his first week in office. While the actions do not have the force of law, they do represent the exercise of considerable power, setting priorities for federal agencies; guiding officials in their enforcement of the law and application of regulations; and in some cases reassigning funding within a particular agency.

The implementation of Trumps most significant actions depends on their surviving any legal challenges and, in cases such as the construction of a border wall, winning support and funding from the Republican-controlled Congress. Other actions, such as those directing agencies to expedite pipeline permits or freeze hiring, take effect upon signing.

Trumps pace for executive actions in his first week is comparable with Barack Obamas in January 2009. In an important sense, however, Trump is moving much more quickly than his predecessors. His executive actions are unusually ambitious, and address a large number of major policy areas, from immigration to trade to national security.

Trump may be moving too quickly. Past White Houses have coordinated the rollout of executive actions with the federal agencies in question and, where possible, with Congress. Trump has a favorable Congress, but he has not reached the point of nominating most of the deputy agency heads who would enact his policies, raising the possibility of future conflict.

Even in cases where his cabinet nominees are in place, Trump reportedly failed to coordinate on sensitive policy prescriptions. A policy applying to an international oil pipeline was reportedly not reviewed by the state department, a policy unraveling Barack Obamas healthcare law was not fully reviewed by the department of health and human services, and a draft policy on torture was not run by the defense department or intelligence agencies.

Here is a list of Trumps executive actions to date:

Taking apart Obamacare. An order stating the White House intent to repeal Barack Obamas healthcare law. It directs agencies to avoid imposing penalties on individuals and others who do not obtain health insurance or who otherwise contravene the law. It directs agencies to waive, defer, grant exemptions from, or delay other penalties, fees, taxes and costs. Health insurers, pharmaceutical companies and makers of medical devices are among those specifically protected by the order, which also directs agency heads to encourage the development of a free and open market for health insurance.

Federal hiring freeze. A memo imposing a freeze on the hiring of federal civilian employees across the board in the executive branch. Does not apply to the military. It calls for a long-term plan to reduce the federal workforce through attrition.

Dakota Access pipeline. A memo reopening a nearly completed project to build a crude oil pipeline from North Dakota to Illinois. The pipeline was stopped after sustained protests by Native American groups, who said the pipeline crossed sacred land and threatened to contaminate a tribes water supply. In December, the US army corps of engineers denied a permit for the pipeline to drill under the Missouri river. Trumps memo directs the army corps to revisit that denial and to approve such requests. The memo also directs officials to consider past environmental reviews as satisfying all applicable requirements of the National Environmental Policy Act.

Keystone XL pipeline. A memo reopening a project to build a tar sands oil pipeline linking Alberta, Canada, and the Gulf coast, which was rejected by Obama after grassroots environmentalist opposition. Trumps memo invites the firm behind the pipeline to resubmit its construction application and tells the state department to review the application quickly.

US steel for US pipes. A memo directing the commerce department to develop a plan to use steel made entirely in the United States for all pipeline projects.

Attack on sanctuary cities. An order denying federal funds to sanctuary cities more than 400 cities and counties that offer some form of safe haven to Americas 11 million undocumented migrants. The order instructs the Department of Homeland Security to publish a weekly list of so-called criminal actions committed by undocumented migrants and publicly announce which jurisdictions had previously ignored or otherwise failed to detain the accused individuals. It calls for support for victims of crimes committed by removable aliens and demands reporting on the immigration status of all federal prisoners.

Build a border wall. An order calling for the immediate construction of a physical wall on the southern border, for stricter enforcement of immigration laws and for speedier deportations. About 700 miles of fencing already exists along the 2,000-mile border. The order calls for a campaign for congressional funding, maybe unnecessarily; congressional Republicans say they will fund the wall, estimated to cost $12bn-$15bn upfront. The Mexican president has reiterated his refusal to pay for the wall.

Extreme vetting. Trump signed an order late Friday and described it thus: Im establishing new vetting measures to keep radical Islamic terrorists out of the United States of America. We dont want em here. We want to be sure we are not admitting into our country the very threats our soldiers are fighting overseas. We only want to admit those into our country who will support our country and love, deeply, our people. The published order included a 120-day suspension of the US Refugee Admissions Program; the indefinite suspension of the admission of any refugees from Syria; the capping of refugee numbers admitted in 2017 at 50,000; and severe limits on immigration from Iraq, Iran, Sudan, Syria, Libya, Somalia and Yemen, all Muslim-majority countries.

Buildup of military. Trump described another action signed late Friday whose text was not yet available: Im signing an executive action to begin a great rebuilding of the armed services of the United States developing a plan for new planes, new ships, new tools, developing resources for our men and women in uniform. And Im very proud to be doing that. Our military strength will be questioned by no one, but neither will our dedication to peace. We do want peace.