But when Republicans cite rising longevity in their call to delay the retirement age, they aren’t taking into account the fact that poor people’s lifespans are increasing at a much slower rate than rich people’s.

A new Brookings Institution report published this month outlines the way in which this policy change would fail the very people Social Security was designed to protect. Not only is there a life-expectancy gap between rich and poor, but that life-expectancy gap is increasing over time so that rich men who are just reaching full retirement age are projected to live 14 years longer than their counterparts. This isn’t just an indicator of fundamental inequality — it may also be a driver of inequality when it comes to retirement benefits. Because of the mortality gap, raising the retirement age, coupled with the existing incentives to defer accepting benefits, would essentially create a backdoor transfer of government payments from the poor to the rich. And none of the Republican candidates are talking about it.

That’s not to suggest that Social Security itself is hurting the poor. Quite the opposite. Social Security is one most effective anti-poverty programs the government have ever implemented. As the Washington Post reported in 2014, without Social Security, 14.7 million more elderly adults would be living in poverty.

The mortality gap is widening

For men who were born in 1920, the mortality gap between the richest and poorest is about six years: The top 10 percent of workers lived to be about 79 years old, and the bottom 10 percent lived to 74, on average.

Within 20 years, that gap doubled: High-income male workers born in 1940 can expect to live until age 88, outstripping their low-income counterparts who are projected to die at 76. Both groups are living longer, but the gains are more pronounced for the rich.

“The fact that that the mortality gap exists is not surprising,” Barry Bosworth, the report’s lead author, told The Huffington Post. “But I was surprised that it is increasing over time.”

Most distressing of all, poor women are actually seeing a reversal in life expectancy. The poorest 10 percent of female workers are now projected to die earlier than poor women did decades ago.

While it’s unsurprising that people with more resources have better medical care, public health gains — such as the discovery of penicillin and the advent of vaccines for diseases like polio and rubella — would suggest the gap should be closing, rather than a widening one. 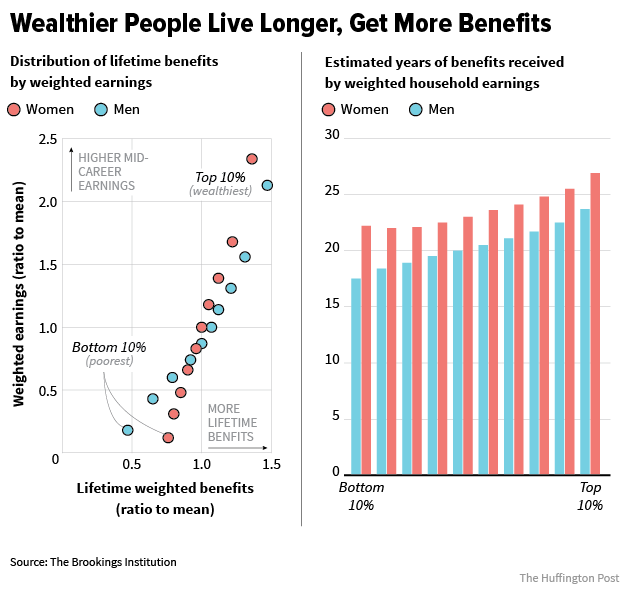 There’s no single cause for the growing life expectancy gap

Like many public health issues, there’s no single explanation for the growing disparity in life expectancy differences between the affluent and the poor.

“It could be a whole constellation of things,” Burtless said. His report mentions behavioral differences between different socioeconomic groups, such as smoking, drinking and lack of regular exercise as possible contributing factors, but also makes it clear that no one really knows exactly why the mortality gap is growing. The report also makes the claim that the difference is more complex than income-based differences in access to health care.

“We cannot account for the fundamental causes of the growing gap in life expectancy,” the authors write. “We can only confirm that it exists.”

This gap makes raising the retirement age toxic to the poor

The payroll tax aspect of the program is key, said President Franklin D. Roosevelt, who designed Social Security. “We put those payroll contributions there so as to give the contributors a legal, moral and political right to collect their pensions and their unemployment benefits,” he said in 1941. “With those taxes in there, no damn politician can ever scrap my social security program.”

Because everyone who works benefits from Social Security, regardless of their socioeconomic status, it garners incredible bipartisan support, effectively protecting the program from the cuts that have stripped other assistance programs such as Medicaid and Temporary Aid for Needy Families. For the rich, Social Security provides extra retirement protection. For the poor, Social Security can mean the difference between living above or below the poverty line. (Social Security lifted a full 21 million people out of poverty in 2014, according to the Center on Budget and Policy Priorities.)

The government’s built-in financial incentives for delaying the collection of Social Security benefits, however, paint a less egalitarian picture. If you postpone retirement beyond your full-benefit age (currently it’s age 66 for people born between 1943 and 1954), you’ll receive an additional 8 percent for each year you delay. The maximum deferral age is 70, and people who wait that long to collect will earn an extra 32 percent in Social Security benefits each year of their retirement.

But here’s the rub: Poor people don’t defer retirement. In fact, they tend to retire at the earliest possible age — 62 — before their full benefits even kick in, in part because the poor are more likely to hold jobs that they don’t like or that involve manual labor. The rich, meanwhile, are also more likely to have enough savings that they can afford to stop working and still defer their social security benefits.

That bears out in research. The report found that across every birth year, low-income workers claimed their benefits earlier than high-income workers.

The result is that the built-in financial incentive to delay retirement ultimately rewards high-earning Americans. If you’re rich, you’ll live longer, and the longer you live, the longer you’ll collect Social Security.

“Workers with higher levels of education have better paying and more enjoyable jobs, and they tend to remain in the workforce longer than those with less schooling,” the study authors wrote.

The biggest worry about Social Security is that it will run out altogether. The program’s trust fund is projected to run out by 2034, meaning younger workers can only expect to receive about 79 percent of their benefits come retirement.

As we know from the Brookings report, the Republican fix — pushing back retirement — will benefit the wealthy and educated, many of whom are already cashing in on delayed retirement.

“A lot of them see it as a pretty good deal,” Burtless said, referring to the financial incentives for deferring retirement. “They’re acting on that understanding of the program.”

On the other hand, “It’s not irrational for people who don’t expect to live very long to claim a pension as early as they can,” he said.

Creating retirement-deferral incentives for rich people is also counter to the reason that Social Security was implemented: to help struggling Americans during the Great Depression.

“The Social Security system has been progressive in providing a boost to the benefits of low-income groups relative to their contributions, but if they do not receive benefits for as many years as the rich, the system is not as progressive as we believe,” Bosworth said.

On the Democratic side, presidential candidate Bernie Sanders wants to address the deficit by lifting the current $118,500 income cap on Social Security, so that high-income workers (those making more than $250,000 per year) would pay the same percentage of their income into Social Security that low- and middle-class workers do.

“It is really the only practical suggestion that I have heard,” Bosworth said.

But of course, none of these solutions address the problem of the mortality gap, nor is Social Security the vehicle to do so. “It would be better to determine the reasons for the differences in life expectancy and try to correct them,” he added.

A likely major component of the mortality gap is that low-income people have poorer educations, less access to jobs, less access to health insurance, and subsequently, to health care, Dr. M. Norman Oliver, director of the University of Virginia Center on Health Disparities, told HuffPost.

While a major conservative talking point focuses on the personal choices of poor people — take for example, Bill O’Reilly’s assertion that our culture is “cluttered with excuses” — many health care workers view access as the salient issue holding back the poor.

It may be more difficult, for example, for people living in high-crime neighborhoods to walk for exercise, or for those without access to a car to purchase fresh fruits and vegetables. Still, he agrees that a solution would need to go beyond health insurance policy to city services, community organizations and public works.

“You start adding all that up across the course of a life and it results in the fact that the populations of racial and ethnic minorities, and poor working-class people get sicker younger and die younger,” he said. “It’s all a result of social inequality.”

Both low- and high-carb diets can raise risk of early death, study finds