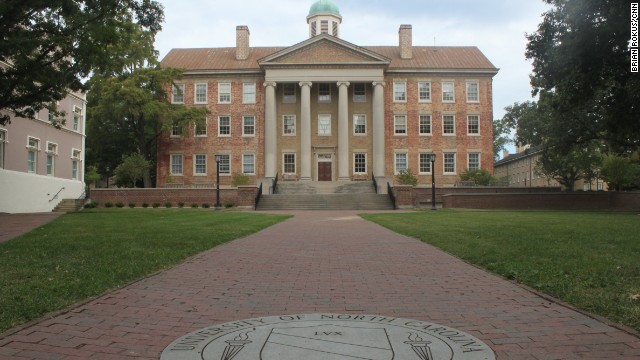 (CNN)An online textbook, which blames Holocaust victims for failing to tap into their strength, is required reading for nearly 19,000 University of North Carolina at Chapel Hill students.

But along with handing out advice about leading a healthy lifestyle, the book delves into other subjects. One excerpt says Holocaust victims who died failed to find their inner strength.
“The people in the camps who did not tap into the strength that comes from their intrinsic worth succumbed to the brutality to which they were subjected,” the book reads. The text was contracted for use for two years, but it is currently under review for the fall, a school spokesman said.
Ryan Holmes, who took a Lifetime Fitness weight training course last fall, was one of a number of students who criticized the book.
“Some of the stuff they said seemed almost like pseudoscience, and it kind of blurred the lines between what I recognized to be real factual information and things that may or may not be true. It put a lot of emphasis on the connection between mental and physical health, more than normal,” he said. “I thought that it was an oversimplification that didn’t account for situational factors.”

The course materials are under review

UNC’s one-credit hour Lifetime Fitness undergraduate requirement has been around since 2006, but the current course material was first used in fall 2017, the school said.
Students can fulfill their LFIT requirement by choosing to take one of several courses. There are 23 options on UNC’s course catalog, including jogging, swimming and flag football.
Not every course looks the same, but the graduate students who teach them use a common syllabus that they adapt for their own sections. Each course uses the same e-book, and about 4,500 students have used the current “21st Century Wellness” since last fall.
Abigail Panter, senior associate dean for undergraduate education, said the exercise and sport science department got student feedback in the spring about certain parts of the book. But edits could not be made in time for use during the next semester, she said.
“In our work to protect and promote academic freedom, we respect the process of departmental curriculum review. As is consistent with our process, we will work collaboratively with the department on any proposed or recommended changes,” she wrote in a statement.
The school works with the book’s publisher, Bearface Institutional Technologies, to make changes to the text. Perceivant, Bearface’s parent company, sells its materials to 15 universities, including Arizona State, Ohio State and Mississippi State.
“The primary goal of the 21st Century Wellness textbook is to provide students information and tools to help empower them to make wise personal choices about their well-being,” a Perceivant spokesman wrote in a statement. “We appreciate receiving feedback from students and faculty and are working with our university partners and authors to make updates each semester.”

What one of the authors had to say

The book was written by former Olympic speedskater Barbara Lockhart and Brigham Young University professor Ron Hager. Lockhart has taught courses on exercise science, the science of wellness and the nature of being. Hager is an exercise sciences professor.
Hager said in an email to CNN that he was surprised by the attention that certain parts of the book were getting. The text never suggests that Holocaust victims couldn’t tap into their strength to survive the concentration camps, he said.
The Holocaust example was meant to show that a person’s circumstance don’t define them and their worth. Some survivors have said knowing their worth helped them survive, and people who didn’t know their worth might have had a harder time in the camps, he wrote.
“A sense of inherent self-worth can be a source of strength or motivation that can help those struggling, in this case in concentration camps but also for anyone,” he wrote.
Others have criticized the book for suggesting cancer is a disease of choice.
“Some experts have begun calling these diseases diseases of choice because how we choose to live, in large part, determines the risk of being diagnosed with disease like heart disease, cancer, dementia, and others,” the book reads.
The book doesn’t say people choose the disease, Hager said. What it does say is that certain voluntary actions, like smoking and physical inactivity, are known causes of cancer, he said.
“I seriously doubt anyone would say they choose cancer or heart disease or type 2 diabetes, etc. But without question, choices can and do have consequences,” he wrote.