Like thousands of South Koreans, Moonsung Bae is infatuated by bitcoin.

The 35-year-old financial analyst got his first taste a year ago, before the cryptocurrency exploded into one of the wildest investment stories of our time, and by the end of last month his personal holdings had swelled to half his liquid assets.

“I had this fear when I first bought,” Bae said. “But then I realized, oh, it actually works.”

It’s certainly worked, at least so far, for those who got in early and rode the speculative wave that pushed the cryptocurrency above $14,000 on Thursday. But where bitcoin and its ilk go from here is the subject of fierce debate, nowhere more so than in Korea, which has emerged as a sort of ground zero for the global crypto-mania.

So many Koreans have embraced bitcoin that the prime minister recently warned that cryptocurrencies might corrupt the nation’s youth. The craze has spread so far that, in Korea, bitcoin is trading at a premium of about 23 percent over prevailing international rates.

While neighboring Japan hosts more transactions by some measures, Korea punches far above its weight: In the 24-hour period through Wednesday evening in Seoul, about 21 percent of the world’s bitcoin trades on fee-charging venues involved the Korean won, according to Coinmarketcap.com. The country accounts for about 1.9 percent of the global economy.

Read more: All About Bitcoin, Blockchain and Their Crypto World

As Korean policy makers grow increasingly worried that the mania has gone too far, the nation could become a focus for bitcoin traders around the world. Korea’s top financial watchdog, which briefly roiled cryptocurrency markets with its ban on initial coin offerings in September, said this week that it has “grave concerns” about overheated speculation and has formed a task force with other government bodies to increase supervision.

“Given the size of the market, there’s a greater need for them to come up with something soon,” said Thomas Glucksmann, Hong Kong-based head of marketing at cryptocurrency exchange Gatecoin Ltd. 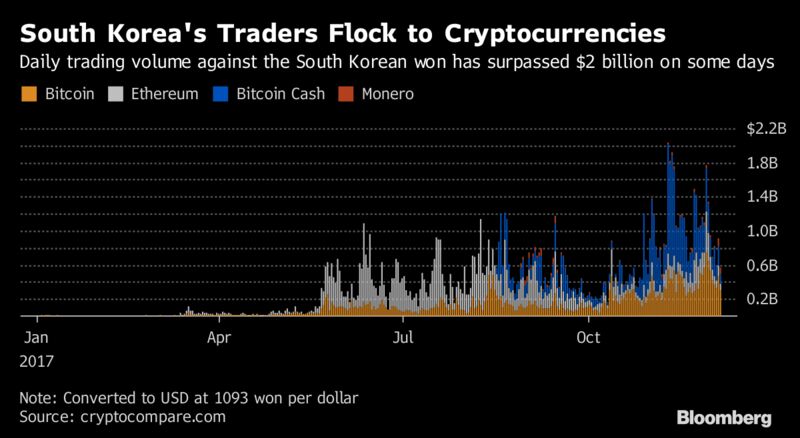 There’s no definitive explanation for why bitcoin has grown so popular in Korea, but local analysts point to a mix of geopolitical and cultural factors.

Bitcoin’s stateless status appeals to some Koreans who’ve grown wary of keeping their savings in a country that shares a border with Kim Jong Un’s increasingly belligerent regime in North Korea, according to Kwak Keumjoo, professor of psychology at Seoul National University.

Political turmoil at home may also be adding to the cryptocurrency’s appeal, she said. President Park Geun-hye was ousted in March after an influence-peddling scandal that involved the nation’s biggest companies.

“People want to take comfort in something outside and beyond the country,” Kwak said.

Equity derivatives are wildly popular in the country, in part because they allow investors to make leveraged bets. Korea’s market for stock-index options was the most active worldwide by number of contracts until the government began cracking down on speculation in 2011, according to the Futures Industry Association.

Kim Do-young, a 34-year-old audio producer in Seoul, said he was drawn to bitcoin because opening an account was easy and it looked like a chance to make a fast buck. “You can cash out super quickly,” he said.

Kim adds to his holdings of bitcoin and about 20 other cryptocurrencies every week, taking profit when he needs money to pay rent.

While it’s unclear what measures will emerge from Korea’s cryptocurrency task force, the government seems intent on acting. The tax authority is considering a levy on cryptocurrency trading gains, Yonhap News reported on Tuesday, while Prime Minister Lee Nak-yon warned last month that cryptocurrencies could become gateways to pyramid schemes and other illicit activity if left unchecked.

“If we let things continue, I feel some serious pathological phenomena could occur,” Lee said.

Bae, who bought his first bitcoin in November 2016 to pay a ransom to hackers who had hijacked his computer, sees room for the market to take a breather as regulators clamp down and arbitragers target the local price premium. He sold most of his holdings on Nov. 29.

But he’s prepared to jump back in once prices fall. After devouring books and articles about bitcoin and its underlying blockchain technology, Bae is convinced cryptocurrencies will come to be viewed as a store of value by more and more people around the world.

As for the regulatory risk, he takes comfort from the fact that bitcoin shrugged off China’s crackdown on ICOs and cryptocurrency exchanges earlier this year.

“Now I only have one bitcoin,” said Bae, who checks the market price about 10 times a day. “But I’ll be buying again for sure.”