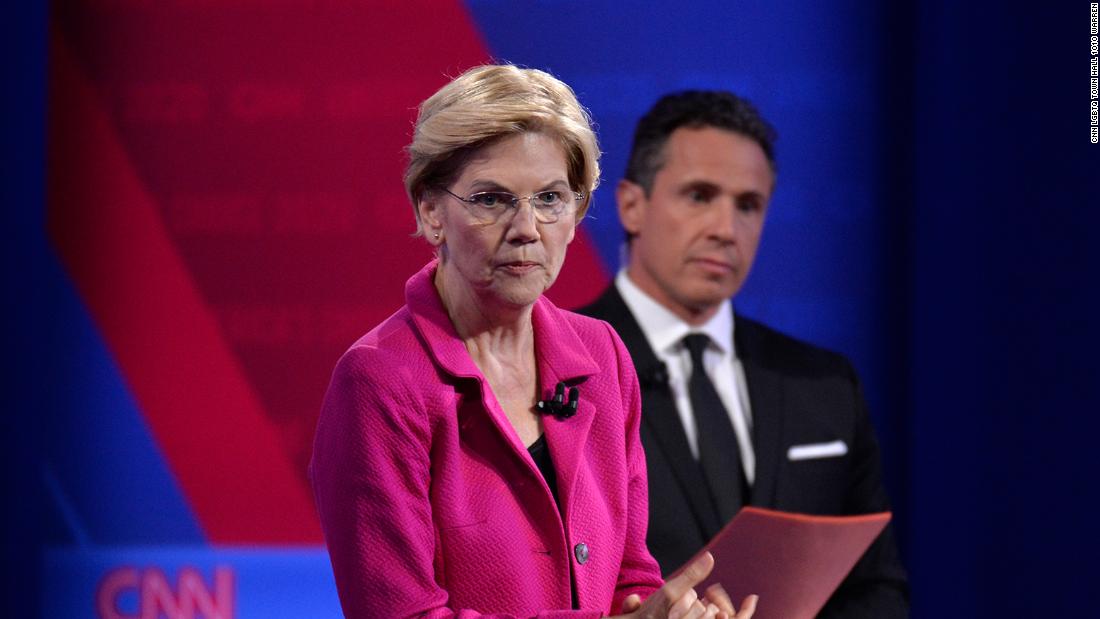 The candidates also talked about faith — and whether religious institutions that don’t recognize same-sex marriages should keep their tax-exempt status.
And at times they were interrupted by protesters who highlighted the plight of black transgender women. One even took a microphone during former Texas Rep. Beto O’Rourke’s appearance. Both O’Rourke and South Bend, Indiana, Mayor Pete Buttigieg, who was also interrupted, praised the protesters.
Here are the highlights from the candidates’ appearances:

Judy Shepard, one of the nation’s foremost LGBTQ rights figures, was on hand for CNN’s town hall Thursday night and asked former Vice President Joe Biden how he would reduce hate crimes against LGBTQ and marginalized communities.
Shepard is the mother of Matthew Shepard, the gay 21-year-old University of Wyoming student whose 1998 murder is one of the nation’s highest-profile hate crimes against LGBTQ people. She and her husband Dennis founded the Matthew Shepard Foundation.
“I don’t want to ruin her reputation but I consider Judy a friend,” Biden said before answering her question.
Biden — like other Democrats — stressed the importance of passing the Equality Act, saying it would come “first and foremost.”
“That’s important. That’s important because it’ll change a whole range of things,” he said.
Biden also said his administration would track hate groups and more muscularly enforce civil rights laws.
Biden also said that “people don’t know” that LGBTQ people don’t have the same civil rights protections that bar employers from firing them over their sexual orientation that exist for other protected classes. He said he would “constantly talk about and educate the public.”
“The American people are better than we give them credit for, but we allow the homophobes to be able to control the agenda,” he said.

Warren gets the crowd roaring 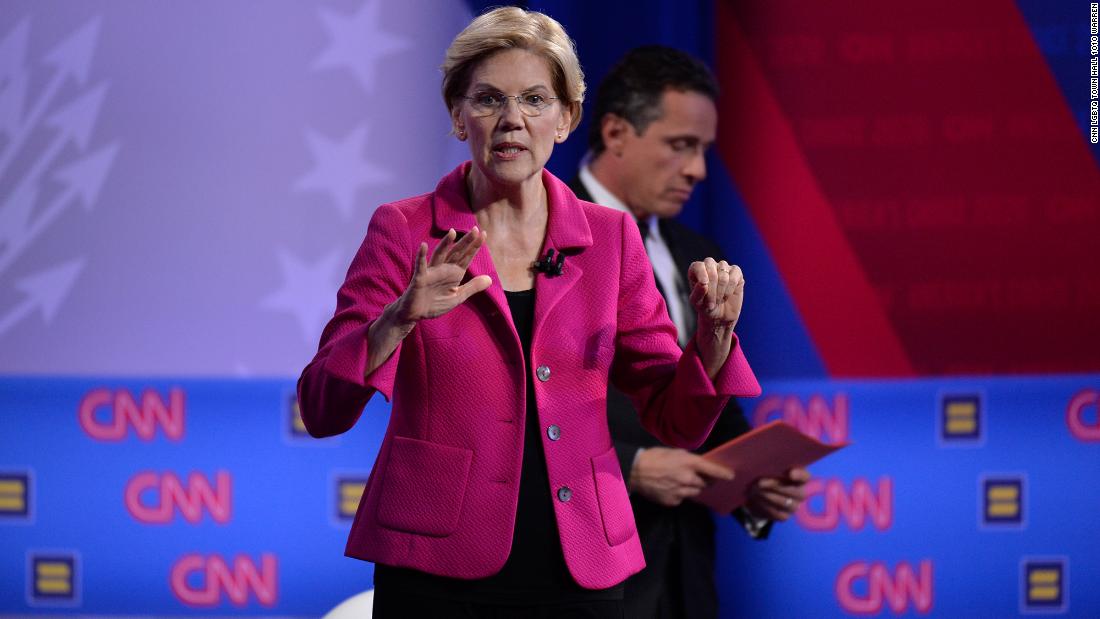 Massachusetts Sen. Elizabeth Warren had the crowd laughing with her answer to a question about what she would say to someone who told her they believe marriage is between one man and one woman.
“Well, I’m going to assume it’s a guy who said that,” Warren deadpanned, “and I’m gonna say, ‘Then just marry one woman. I’m cool with that.”
Then she twisted the knife: “If you can find one.”

Beto O’Rourke said religious institutions should lose their tax-exempt status if they oppose same-sex marriage.
“There can be no reward, no benefit, no tax break for anyone or any institution, any organization in America that denies the full human rights or the full civil rights of every single one of us,” he said at the town hall.
He added: “And so as president, we are going to make that a priority and we are going to stop those who are infringing upon the human rights of our fellow Americans.” 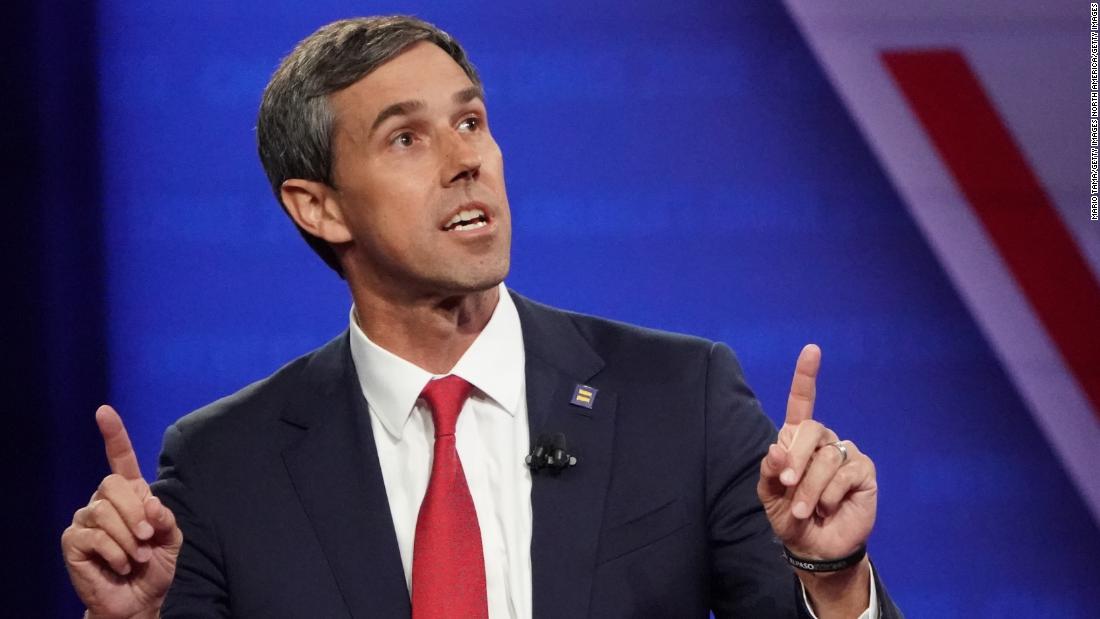 It was the same question that New Jersey Sen. Cory Booker had refused to offer a yes-or-no answer to earlier in the town hall.

Democratic candidates opposed so-called conversion therapy, which is centered on the debunked assumption that sexual orientation can be changed by a series of procedures. The practice is widely decried and leads to significant childhood traumas.
Minnesota Sen. Amy Klobuchar said conversion therapy “makes no sense at all” and should be illegal.
“We know this isn’t the right thing to do,” she said.
She was answering a question from Seth Owens, who was forced into conversation therapy when his parents discovered his sexual orientation. He went on to be the valedictorian of his high school and was accepted to Georgetown University.
“What I’m amazed about you, Seth, is you somehow got through this and are a hero to so many other young LGBTQ community members,” Klobuchar said.
O’Rourke was the first candidate to be asked about so-called conversion therapy, which he said “should be illegal.”
“This is tantamount to torture — a torture that we’re visiting on children who are absolutely defenseless,” he said.

Pete Buttigieg, the South Bend, Indiana mayor and only LGBTQ candidate in the Democratic presidential field, said that using faith as a reason to discriminate against LGBTQ people “makes God smaller” and is an “insult to faith.”
Buttigieg often talks about his personal faith — he is Episcopalian — and how it relates to his sexuality. On Thursday, he was asked whether he can point to any teaching in faith that allows “restaurant owners can deny service based on so-called religious liberty.”
“Without telling others how to worship, the Christian tradition that I belong to instructs me to identify with the marginalized and the greatest thing that any of us has to offer is love,” Buttigieg said. “Religious liberty is an important principle in this country and we honor that. It’s the case that any freedom that we honor in this country has limits when it comes to harming other people.” 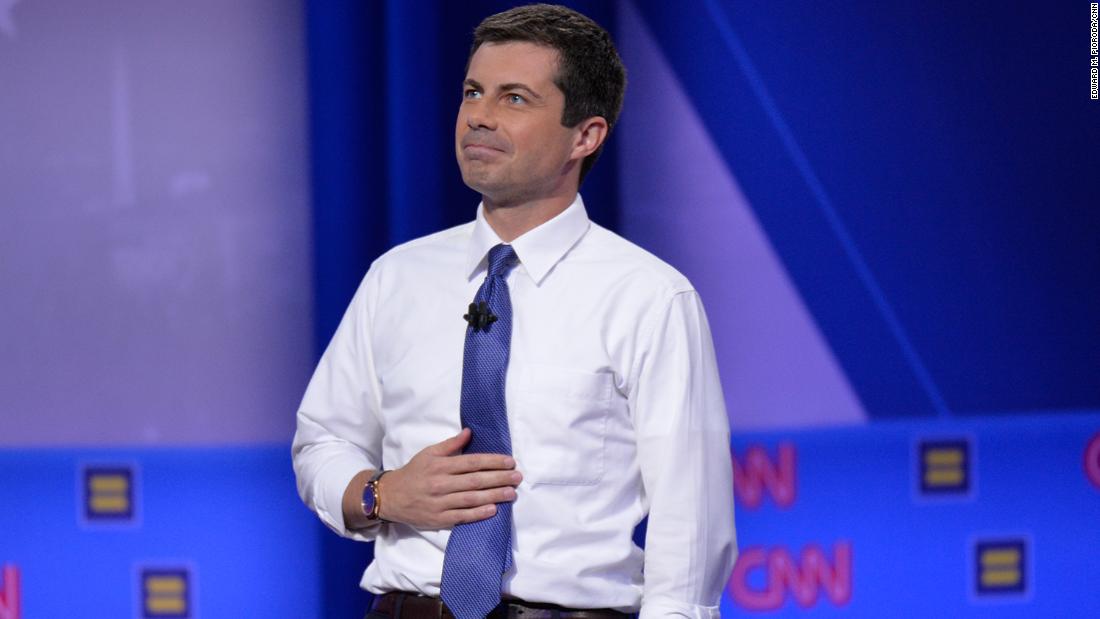 Buttigieg: I wish Pence would understand this

Buttigieg then reflected on his own view of faith.
“I have to say, when religion is used in that way, to me, it makes God smaller,” he said. “It, to me, is an insult not only to us as LGBTQ people, but I think it’s an insult to faith to believe that it could be used to hurt people in that way.”
The answer came after protesters interrupted the start of Buttigieg’s town hall. Buttigieg praised them for calling for greater attention to violence against transgender women of color.
“I do want to acknowledge what these demonstrators were speaking about, which is the epidemic of violence against black trans women in this country right now,” Buttigieg said. “And I believe or would like to believe that everybody here is committed to ending that epidemic, and that does include lifting up its visibility and speaking to it.”

New Jersey Sen. Cory Booker was the first to answer a question about whether he would lift the Food and Drug Administration’s ban on blood donations from gay men who have had sex within the last year.
“Two words: Absolutely yes,” Booker said.
Booker was up first, but other Democrats would give similar answers as the night went on — showing that the party’s 2020 field is united on the issue of dropping prohibitions that date back to the HIV and AIDS epidemic in the 1980s. The FDA previously banned donations from gay men for life, but in 2015, limited the restriction to a year.
Booker said the ban, which originated in the 1980s, at the height of the HIV and AIDS epidemic, is an outdated stigma, and that if he wins the Democratic 2020 nomination and is elected president, he would be “using my platform everyday to dispel ignorance.”
“I’m going to be using my platform everyday to tell the truth, to heal, to bring the truth forward,” Booker said.

Julián Castro called on his successor as Housing and Urban Development secretary, Ben Carson, to resign over disparaging remarks the Trump appointee made about transgender people.
“The comments that Secretary Carson, my successor, made a couple of weeks ago are shameful. When you’re housing secretary, you’re there to serve everybody. And his comments made clear that he’s not able to serve everybody,” Castro said. “I believe that he should resign because of that, because he can’t serve everybody.”
The former HUD secretary was referencing a Washington Post report in which Carson is said to have warned colleagues that “big, hairy men” were attempting to make their way into women’s shelters.
In response to the initial report, Castro tweeted: “19 Black trans women have been killed this year because comments like Ben Carson’s normalize violence against them. As HUD Secretary, I protected trans people, I didn’t denigrate them.”

Harris: ‘We will end HIV/AIDS’ within a generation

California Sen. Kamala Harris said that she, as president, would make ending HIV/AIDS within a generation a priority, telling an audience on Thursday that she learned about the impact of the virus from her first campaign manager.
“We need to deal with it in the context of having a commitment. My commitment: Within a generation we will end HIV/AIDS,” Harris said.
Harris, in response to a question about the impact HIV/AIDS have on black Americans, went on to say she would “pay attention to who has access, who has the ability, who has the resources to benefit from all that is available to prevent, right, or to mitigate the effects” of HIV/AIDS.
Harris reflected on how much she learned about racial discrepancies around HIV/AIDs from Jim Rivaldo, her former campaign manager who also worked for Harvey Milk, the famed first elected official in California who identified as gay. Rivaldo died in 2007 after a lengthy battle with AIDS, hepatitis C, liver cancer and diabetes, according to The Bay Area Reporter.
He was “an extraordinary person who always would talk about Bay Area, about the coalition and he would always talk about the need to recognize that within the community there are real hierarchies based on race,” Harris recalled.

The concern about mental health problems and high suicide rates among vulnerable people within the LGBTQ community was a huge focus for many of the Democratic candidates. Tom Steyer argued that the alarming statistics themselves should have the power to move public opinion toward the “social acceptance of people.”
Steyer, a billionaire hedge fund founder, argued that the president needs to “show exactly where their heart is” through their behavior.
“When I think about this from the standpoint of what you can do to change the way people view themselves, and other people view them in the LGBTQ community, I think on the very first day there should be steps taken to undo the example that Mr. Trump and Mr. Pence have laid for the country,” Steyer said. “That would mean undoing the ban on transgender military people. It would mean undoing the ban on visas for same-sex partners of foreign diplomats, and mean appointing people from the LGBTQ community to high important parts of the administration.”
Steyer touched on the number of LGBT people who face discrimination on a daily basis and have no protection under federal law. And he said he was stunned to learn that half of transgender youth attempt suicide.
“If that doesn’t explain to you that the very dire situation that they feel themselves to be in, then you must have a heart of stone,” Steyer said. “Anyone who doesn’t want to do whatever it takes to protect the young people, really must search their soul to find out what their deepest values are. As an American that would seem as basic as you can get — in terms of protection, equality, justice. My goodness. I don’t see that there’s another side to the conversation.”