There’s no denying that Marvel knows how to ensemble a sick cast, as nearly all their films feature a cornucopia of talent working for a tenth of Robert Downey Jr.’s rock band T-shirt budget. But good acting doesn’t spring out of the ground like some overzealous orc; it takes years of honest work and small gigs to earn your mask.

Luckily for us, that equates to a library of humiliating bit parts that our favorite superheroes had to endure. Join us as we now point and laugh them, and the sad roles they probably still cringe at from their money-carpeted bungalows …

J-Renn has been around Hollywood more than you even realize. Having started his career as a makeup artist, The Hurt Locker star moved on to appearing in countless bit TV parts — from a punk rock singer in House to a punk singer in Strange Luck. 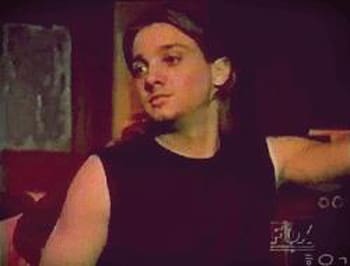 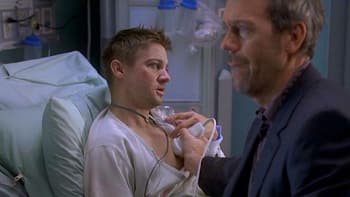 Those of you with terrible taste might also remember him in National Lampoon’s Senior Trip. But for anyone who grew up in the 90s, the Renn-Dog was secretly a household staple you probably weren’t even aware of. For this generation, Hawkeye’s face is an undefined specter of TV nostalgia secretly looming in our collective memory. A whisper in the void, inadvertently causing us to pine for simple household comforts like a wayward hiker on his last breath. That’s because Jeremy Renner was in pretty much every 90s commercial in existence. From Duracell, where he entombed the running of the bulls into a d-volt like they were a pack of genies …

… To an ad where he takes a date to 7-Eleven after hallucinating a sexy angel, and somehow gets laid for that … 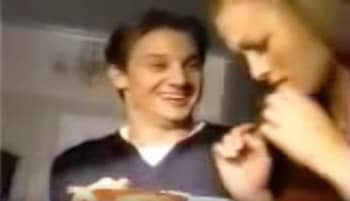 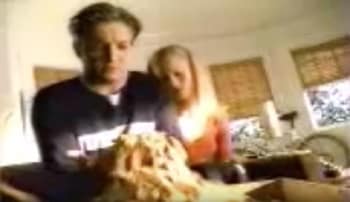 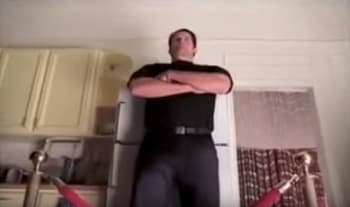 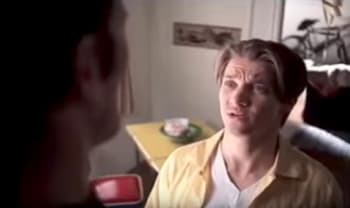 … And finally to a tragically dated Kodak ad, featuring all your extinct 90s fads like CD-Rs, photo processing, bulky computers, references to aliens, neck-length grunge hair, and of course Kodak itself. 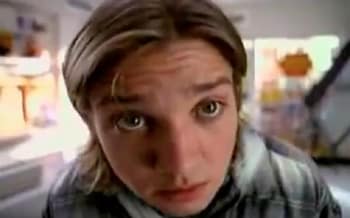 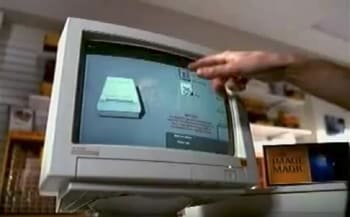 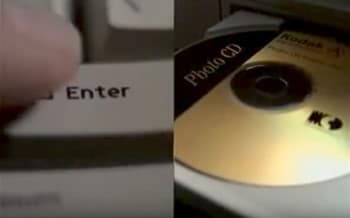 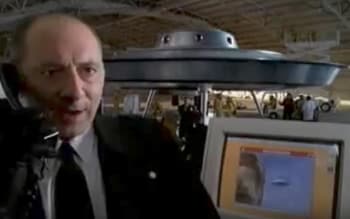 Yep. Wherever people were glued to their Twin Peaks and Dr. Quinns, Jeremy was there to sell them gross beer and large batteries. But hey, after paying all his dues, it’s finally nice to see him thriving in the tech-savvy 21st century by playing a character known for wielding a weapon from 9,000 BC.

Before he was riding the hammer or even crashing starships, the Welshie beef-slab Chris Hemsworth was getting his humble start in the most accessible way for a guy who looks like he kicks sandcastles for a living: playing a swim-team jock named Kimberly on an Australian soap opera. 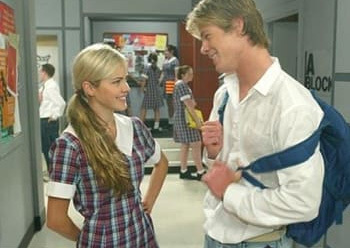 Taking place in the pretend coastal town of Summer Bay, the show has so far run a hearty 30 seasons, with the actor lucky enough to appear in 171 of those 6,679 goddamn episodes.

And like the rule of Caligula, the reign of Hemsworth forever ingrained its short span with debauchery and madness. During his time on the show, the character of Kim Hyde underwent having a secret baby, father issues, a serial stalker, a second baby, one failed wedding, his first love triangle, a paternity plot twist, being thrown from a car and left for dead, falling in love with his attending doctor, having his father convicted of murder, rescuing a kidnapped woman, falling in love with the woman he rescued, a second wedding, an explosion, a helicopter crash and by extension a second explosion, nearly dying in the wilderness, having the mumps, getting framed for assault, adopting a third baby, giving the third baby away, having another baby, and one more love triangle before forever leaving the show and our hearts. Also, somewhere in there he managed to be rendered unconscious at least twice:

You really have to respect the level of acting devotion required for that kind of melodramatic ringer — especially since he’s not the only iconic superhero actor to appear on this show. And if all of this wasn’t exhausting enough, dude managed to nab a spot on the Australian version of Dancing With The Stars before getting booted six weeks into the season.

Look at that garish shit. Soak in the God of Thunder as he takes those brawny hips for a spin around the world. Somehow it’s not hyperbolic to assume that, when offered the role of a God vigilante, Hemsworth considered it a refreshing change to normality. We can laugh, but only because we know he doesn’t have time to kick our asses… what with the three babies and all.

Even before he was icing his dick in Not Another Teen Movie, Chris Evans was the cathartic sexual touchstone for way more teenagers than we’re sure he’s comfortable with. You see kids, back before smartphones and accessible meth, adolescents were forced to pass the time with colored boards furiously cobbled by a Hasbro braintrust — the result being a landfill’s worth of elaborate board games. One of which, Mystery Date, featured a series of teenage “hunk” cards that young girls and sex offenders could fawn over during sleepovers.

One such pubescent muff champion was “Tyler” — a hip dude who loved to surf, barbecue, and hang with friends in his downtime between talking on the phone and smiling vacantly. 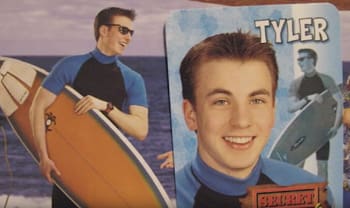 Hasbro, Inc.
“Shields are so much easier to lug around.”

Yeah, that’s totally Chris Evans right there. As Buzzfeed did the legwork to find out, the photo above comes from his 1999 high school yearbook — and was apparently enough to wow the makers of this game to feature him on its cover as well. 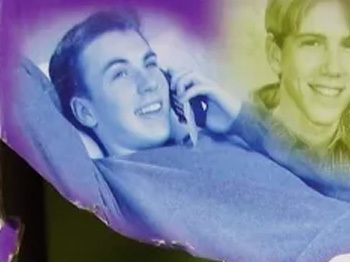 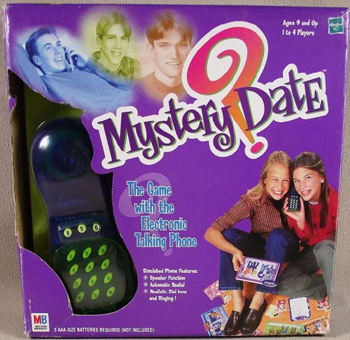 Hasbro, Inc.
“Which of these dreamy 16-year-old hunks is way too old to be dating your 12-year-old daughter? Let her play and find out!”

Look how happy and relaxed he is in his little blue fart cloud, engaging in this Mamet-esque web of telephone tween lust! When confronted about it, Cap was naturally delighted about the internet’s discovery — revealing that it was shot in a single day and that he truly has no idea how to hold a surfboard … which might explain why he was schooled by a silver one in an arguably more embarrassing past role.

Paul Rudd has had a rich and extensive career of terrible haircuts. There’s his Billy Zane in Romeo + Juliet, the wizard sideburns in 200 Cigarettes, the 90s Affleck cut in Clueless, and of course the breakout oily scumbag look from The 40-Year-Old Virgin. And for all you Rudd-hair aficionados, there’s simply no forgetting the cosmetological war crime in this early-90s Super Nintendo ad, where he rocks out at an abandoned drive-in theater while dressed like Satan’s acting agent. 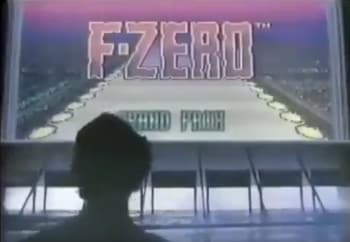 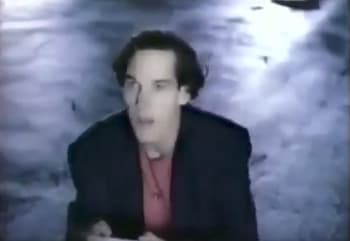 But in all of that madness, there’s somehow one hilarious cut that takes absolute importance over all the rest, unfortunately hidden in the depths of cinematic obscurity. Feast your orbs on this amazing shit: 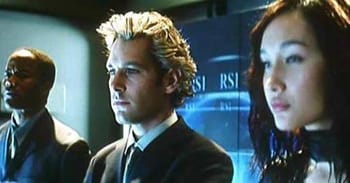 Dude looks like a fucking Tekken character. He’s like if Paul Ryan did Super Saiyan cosplay. His hair looks like it grants wishes to frat bros. It’s how you imagine a young Doc Brown’s pubic hair to look. Please leave a comment to tell us the various things Paul Rudd’s hair looks like in that photo.

If you’re wondering: That’s FBI Agent Ian Curtis, a dickish bossman and token American forced to help fight a giant robot in the Jackie Chan-produced Gen-Y Cops. No, really. Here he is jumping out of an exploding car during the final action sequence:

And here he is helping to save the day by (spoilers) dragging said robot into a lake before watching it self-destruct.

Fantastic. Before you chop this whole ordeal up to the perils of being new to the biz, keep in mind that this film is from fucking 2000 — long after his roles in American films. According the Pudd himself, the entire debacle came at a financially low moment when he told his agent he’d take any job so long as it paid his next rent. Somehow that resulted in bleaching his hair and flying to Hong Kong for robot grappling … and the world is better for it.

The Hulk Had Issues With Acne In The 80s 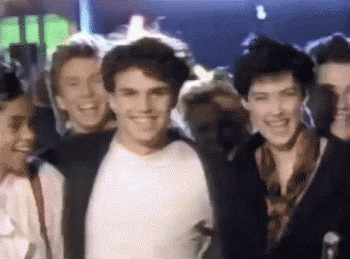 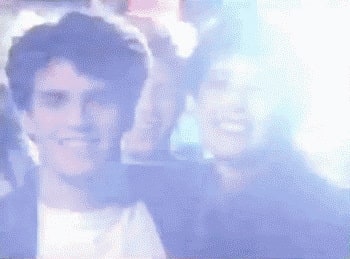 As recently knee-slapped on The Tonight Show with predictable levels of howling Jimmy Fallon desperation, the Hulk actor explained his audition for the ad — getting the part because he appeared to have “come right off the street.”

That’s the opening of the ad where, after bombing through alleyways, his character suddenly realizes that his skin isn’t so clear — presumably while buying the cocaine needed for his evening fuck pile. You probably guessed his character’s arc because we already spoiled the ending for you… but needless to say he uses Clearasil’s Double Clear pads in a frenzy of drug use — as artfully portrayed with various “zap” graphics representing the firing brain synapses caused by the rails of blow pumping through his veins like gamma radiation.

Anyone who’s gone far enough down the Pratt-hole probably remembers the time he got his pretty face thunder-slapped by Professor X in the terrible movie Wanted. Here’s a gif of it for anyone in need of a memory jog:

Obviously there was Parks and Rec, and his slightly more forgotten role on the The O.C. But we don’t want to talk about any of that. Instead, we’d like to talk about his first paying role in a little impossible-to-find film called The Extreme Team. 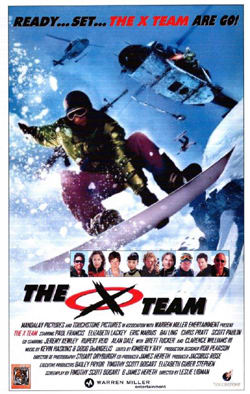 That’s right … It’s “extreme” with an “X,” therefore highlighting the severity of just how extreme this particular team promises to be. Made in 2003 in New Zealand, the film’s IMDb synopsis describes a tale of action, snowboarding, and killer computer programing when a group of important businessmen are kidnapped while on a ski trip … forcing a Navy SEAL to lead a special “X-Team” into harm’s way. Can you guess who plays one of these far-out assassins? 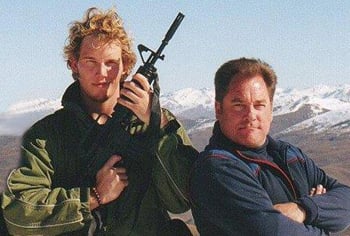 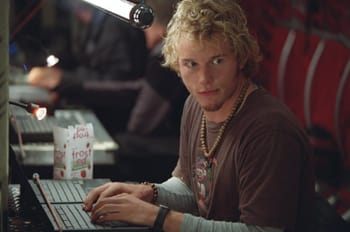 And that’s really all we know about this film, which appears to be all but vanished from the internet or any form of distribution. Pratt, if you’re reading this and happen to own your own copy, we’ll kindly pay you $20 for it. The world deserves this.

Seriously, Chris Pratt — contact Dave on his Twitter with instructions on how to purchase a copy of The Extreme Team.

For more movie roles celebrities would wish we could forget, check out 8 Insane Early Roles Famous Actors Don’t Want You To See and 5 Great Actors With Dumb Early Roles They Hope We Forgot.

Subscribe to our YouTube channel, and check out 16 Terrible Movie Accents We All Let Slide, and other videos you won’t see on the site!

If we’ve ever made you laugh or think, we now have a way where you can thank and support us!