Accidents happen. You dropped your partner’s favorite coffee mug, your dog destroyed your beloved sweater, your dad erased your video game save file and blamed it on ghosts — we’ve all been there. For the most part, we learn to forgive, forget, and move on with our lives … but that’s because our goofy little accidents aren’t responsible for annihilating invaluable cultural treasures. Unlike these poor saps …

A Boy Slipped And Punched A Hole Through A $1.5 Million Painting

In 2015, a Taipei arts center hosted an exhibition of 55 valuable paintings donated by collectors. Crucially, the organizers had special permission to let visitors get closer than normal to the exhibits so they could really appreciate the hell out of some art. And thus was born a valuable lesson about the follies of trusting the general public.

A 12-year-old boy was walking past a large 350-year-old still life by Paolo Porpora — the only work Porpora ever signed, hence its worth of $1.5 million. Suddenly the kid tripped, lost his balance, and flailed around like a cartoon character who stepped on a banana peel. He reached for the closest object he could find to restore his balance, and that was, of course, the incredibly valuable work of art.

TST Art of Discovery CorporationYou can see the exact moment the poop fills his underpants.

He managed to avoid wiping out, but he also tore a fist-sized hole in a painting worth more than most people will make in their lifetime. The poor kid then had to stand around looking sheepish while everybody figured out what to do with him, probably daydreaming all the while about his new future as a slave in the great art mines. 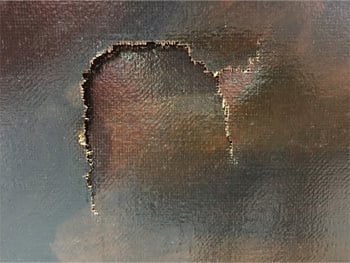 TST Art of Discovery Corporation“Do you have any 350-year-old duct tape?”

Luckily, the painting was insured, but while some restoration work was possible, it will never be quite the same. The exhibit’s curator was so shocked by the news that he couldn’t speak for a few minutes, although he ultimately forgave the boy and his parents, because it is the mark of a mature adult to appreciate a good slapstick routine even in the grimmest of times. The resulting news story actually improved attendance at the exhibit, although the restricted area in front of each painting went back to its original size. Always practice safe gallery attendance, kids.

A 2,300-Year-Old Mayan Pyramid Was Demolished So A Construction Company Could Use Its Stone To Make A Road

In 2013, a Belizean construction company was looking for quality limestone to build a road. And sure, they could have excavated some from a quarry like everybody else, but why bother with all that when there was a giant heap of limestone right at their doorstep? Oh, because those rocks made up the 2,300-year-old Nohmul complex, one of most important Mayan pyramids in the region? Wish you’d spoken up sooner, rhetorical question; the company had already deployed an army of backhoes and bulldozers to utterly demolish the temple. 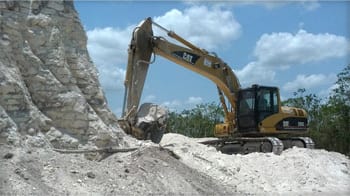 Jaime Awe/Belize Institute of ArchaeologyReasonably sure their prediction calendar missed this one.

The head of the Belize Institute of Archaeology said the news was “like being punched in the stomach,” and “one of the worse set of blows I have felt, philosophically and professionally.” He also found it amazing, as we probably all do, that people would bulldoze a structure older than the Bible out of sheer laziness. While archeologists were able to recover some artifacts, there was no chance of repairing the pyramid itself.

Sadly, this is a widespread problem in Belize, a tiny country with many archaeological sites but few resources with which to protect them. This kind of willful destruction is still against the law, of course, and justice was served, as the company and three of its top brass were given the maximum possible penalty: a fine of, uh, $24,000. We hope they learned some kind of lesson from this, though we’re not sure what that might be. Destroying history won’t save you as much money as you’d initially hoped?

In 1980, the Bonwit Teller Building in Manhattan was being demolished by noted slumlord Donald Trump to make room for his Temple of Doom, officially known as Trump Tower. The historic building included two large Art Deco friezes, which were considered “as important as the sculptures on the Rockefeller building” by the gallery owner who assessed them. The Metropolitan Museum of Art wanted to acquire them, and they had apparently reached an agreement with Trump on how to save them.

But then it turned out that keeping the friezes intact would delay construction by two whole weeks, and add the exorbitant cost of $32,000 to the Tower’s $80-100 million budget.

Museum of the City of New York“32 grand?! You know how many non-disclosure agreements I could get with that?!”

Since the idea of spending money for the benefit of anyone other than himself is against his whole shtick, Trump simply had the 51-year-old friezes demolished. Workers went at them with torches, crowbars, and jackhammers, then let them plummet to the ground, shattering them into countless pieces.

In response to the ensuing criticism, Trump spokesman John Baron declared that the friezes had been apprised and found to be “without artistic merit.” Two problems with that claim: One, the Met passionately disagreed, and they’re kind of the experts on this sort of thing. And two, John Baron was a fake name Trump used to speak to the press himself, because he lies about as well as a small child. Presumably he settled on it after rejecting Super Michelangelo, PhD in Art Smarts for being “too amazing of a name named by the best namer.”

For 126 years, the entrance to Lisbon’s Rossio Station had been graced by a statue of King Sebastian, a 16th-century monarch considered a Portuguese national hero.

Infraestruturas de PortugalPlease notice the phrase “had been.”

In May of 2016, a 24-year-old man climbed up onto the monument in an attempt to get a sweet selfie of himself and the king. It didn’t go as planned. The statue toppled to the ground and smashed into the train station, which is itself considered a historical national landmark. That’s right, he destroyed art with other art.

The man fled the scene, but police quickly caught him by following the trail of panic urine.

For 300 years, the Sahara desert was home to the most isolated tree in the world. 250 miles of lifeless, inhospitable dunes stretched away from the Tree of Tenere in every direction.

A leftover from a time when the Sahara was more vibrant, the tree only survived thanks to its deep, deep roots, which reached 100 feet into the ground to tap freshwater reserves. It was such a miraculous landmark that European military maps at 1:4,000,000 scale still showed the tree, and locals had a taboo against harming it. The tree was a “living lighthouse” — the only major landmark that a caravan crossing the desert would pass. This was pretty much the peak of celebrity status for trees, is what we’re saying here.

Michel MazeauWe were still decades away from Groot.

There are rumors that the driver was drunk, but does that matter? This was literally the easiest object on the planet to avoid — the only actual thing on a great plain of nothing — and the guy still managed to kill a huge piece of natural history.

Are you wondering how a passing truck was able to take out the ancient tree so easily? Well, it was already in a weakened state. From the time someone else hit it with a truck.

The remnants of the tree were hauled off to the National Museum of Niger, and a metal sculpture honoring the tree was erected to mark the spot where it once stood. We will inform you as soon as some asshole hits that with a truck, too.

Get to making your own priceless art. Watercolors are pretty great, despite what Bob Ross might lead you to believe.