Generally, the phrases “corporate jingle writer” and “actual musician with a soul” aren’t mixed. We imagine the latter as baring their raw essence on stage as they display their talents for the world, while we see the former as a guy who spends three seconds crafting “7 Up … goes great in a cup!” before taking a lunch that lasts the next five months.

Except sometimes, they are blended in a way that will surprise everyone who’s ever asked you to really “feel the music.” Turns out a lot of those annoying tunes you can’t get out of your head, no matter how many bricks you smash it against, were written, composed, and even performed by legitimate artists. Your favorite musicians are responsible for the short tunes that inspire madness whenever they’re heard, like …

#5. The McDonald’s “I’m Lovin’ It” Jingle Is A Weird Mismash Of Justin Timberlake, Pharrell Williams, And Pusha T

Since its 2003 birth, the McDonald’s “I’m Lovin’ It” jingle has been covered, redone, and remixed so many times that it’s easy to forget the original version was a hip-hop tune. Or rather, as hip-hop as anything with the thesis “reheated meat patties of questionable origin sure are tasty” could possibly be.

It would’ve made sense to nab some intern, hand them a lyric sheet, and order them to make “I’m lovin’ it / is this the place to eat? / Since I don’t cook / I’ll just rock to the beat” sound convincing. But instead, McDonald’s hired three big stars to create two different songs, and their powers combined made the company richer (and the world fatter) than ever.

The above rap was written by Pusha T, one half of the famed rap duo The Clipse. He kept quiet about it until recently, since it’s hard to maintain street cred when pushing food that tastes like the bottom of a sandal. But in June 2016, during an interview with Hot 97, former record exec Steve Stoute revealed that Pusha T wrote and performed the original song (no word on whether he had a hand in “McNugget Love” years later). With the cat now out of the bag, Pusha confessed on Twitter shortly thereafter. 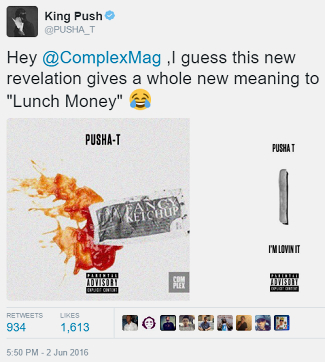 Have you stiched a snitch today?

McDonald’s, for their part, deny Pusha had any role in the song, because good luck selling Happy Meals if your campaign is built around a guy whose gentler lyrics include “Hines Ward of the crime lords / Running through this money screaming ‘encore’ / Spending nights with the prime whore / But that’s the bitch that you’re blind for.” One listen to the guy’s voice, though, and there’s no denying it’s the same one who paid the bills with burger pillow talk.

And the other two artists I mentioned? In that Hot 97 interview, Stoute outed Pusha because the DJ had credited Justin Timberlake and Pharrell Williams as the McD’s writers, and Stoute was not about to let that slide. Thing is, they did write the jingle! Just in a different way. See, months before McDonald’s started bleating “I’m Lovin’ It,” JT and Pharrell wrote their own song called “I’m Lovin’ It.” Complete with the “ba-da-ba BA BAHH” hook.

What a crazy, lawsuit-ripe coincidence, no? Well, no. McDonald’s commissioned Not-Joey-Fatone and the Happy Minion Guy to write the tune (which had nothing to do with fast food, at all), and tattoo the catchphrase onto America’s collective subconscious. After a few months, Ronald and company would swoop in with their campaign, featuring a riff and phrase everybody was already used to. Call it reverse engineering or a viral campaign — it clearly worked, judging by the half-dozen triple bacon cheeseburgers I just polished off between jokes.

And to anyone who still doubts that Pusha T wrote anything: In 2007, Timberlake flat-out said, “I regret the McDonald’s deal.” And yet here’s Pusha, happily admitting he sold out once and evolved into Patty Pusha T. If that’s not proof that he actually did it, I have no clue what would be.

New Age soft-pop overlord John Tesh has won two Grammys and six Emmys, and has sold over eight million albums, despite being the butt of over eight million “John Tesh is for old ladies” jokes. But if you’re into sports themes, he’s your man. He recorded the 1983 Pan-American Games theme, the theme for CBS’s Tour de France coverage back in the ’80s, and, oh yeah, this little number:

That catchy ditty, made up of 10 percent chords and 900 percent hype, is “Roundball Rock.” You probably know it better by its other name, “The NBA On NBC Theme,” one of the most iconic and recognizable themes in all of sports. Even people who think basketball is actually named Roundball get pumped for some hardcore sportin’ within five seconds of hearing it. And John “Granny’s Favorite” Tesh wrote it.

According to the man himself, he was touring Europe in 1990 when a fun melody popped into his head — much like how when I tour Europe, fun euphemisms for penis just come to me. Before he pulled a Tenacious D and forgot everything, Tesh called his answering machine and scatted the melody into it. Then, when he returned home, he sat his ass down at the piano, set his ba-ba-bada-ba-BAH’s for 122 beats per minute (what he deemed the speed of a “fast break,” or how a basketball team rushes down the court to score before the other team remembers to tie their shoes), and turned it into “Roundball Rock.” 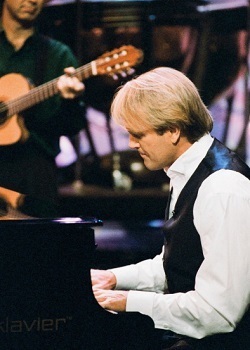 That’s also the speed at which people rush to the exits once they realize he’s no Yanni.

He then spent $15,000 of his own money (this was back when musicians made money) to record an orchestral version, which he sent to NBC. They loved it, played it before, during, and after every NBA broadcast until 2002, and paid Tesh shitloads for the privilege. He made over six figures a year just on that song, whose primary purpose is to remind you to grab a beer and rush to the couch because the Bulls are back on.

Because Tesh never got public credit for “Roundball,” many people still don’t know he wrote it. Which is why he tells them at every show he plays. He’ll tell the story of how the song came to be, play the original answering machine recording of his hums, and then fucking jam:

There is not a moment of John Tesh performing “Roundball Rock” live that isn’t the greatest moment since the Earth cooled. Does he start by dribbling an imaginary ball so poorly that even the worst imaginary benchwarmer would steal it in seconds flat? Of course he does! Does the orchestra have shit-eating grins on their faces because finally they’re not snooze-fiddling their way through “Song For Jennifer”? Hell yes they do! Does the crowd sit on their fucking hands like, “Cool story, babe, now make me a sonata?” Well, yes, but at least Tesh and company are having fun.

Foster the People have one song that anybody cares about: that “Pumped-Up Kicks” ditty, which sounds like an anthem to shoe shopping and ends up being an anthem to hating people that go shoe shopping. In short, the singer shoots up his school at least in part because everybody has nicer sneakers than him. Now that that’s out of the way, let’s focus on what truly makes the band tick: Muscle Milk.

See, while in the process of fostering some people, singer Mark Foster worked as a commercial jingle writer for an LA company called Mophonics. It’s what taught him to write catchy, tight melodies in all sorts of genres, even when gently crooning about a violent and terrible mass shooting. And in one case, it taught him the intricacies of writing goofy raps about drinking Muscle Milk while wasting your life away on the Jersey Shore.

You can clearly see where Foster’s knack for “happy tune, depressing message” came from. This song, called “Spring Break It Down,” is ostensibly about Muscle Milk and how it’ll make you all muscly in time for Daytona Beach. The video is colorful and wacky, featuring dancing girls, hot guys, underpaid extras in dancing manatee costumes, and wet T-shirt contests. Oh, and no Muscle Milk shown until five seconds before the two-and-a-half-minute video ends. Great product placement, everyone!

It was worth it for more dancing manatees.

But then you listen to the words, and you hear the lamentations of a total loser who fails at everything except Spring Break. Tell me these lines aren’t a bigger cry for help than anything in “Margaritaville”:

“Spring Breakin’ It Down / And pumpin’ our fists / I should probably see a doctor / When I get home from this trip.” 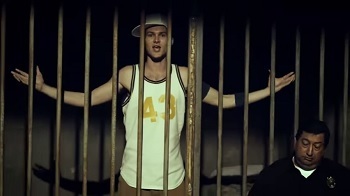 Get ready for a steady diet of dirty water and muscle mush.

So basically, Mark Foster called out Spring Break bros as pathetic losers who can go fuck themselves, but because he wrote “Sippin’ on some Muscle Milk / and headin’ to a beach town,” ten seconds in, it passed the commercial sniff test. This makes me wonder if “Just for the taste of it, Diet Coke” sneakily accuses Nixon of killing Kennedy halfway through the third verse.

Also, Mophonics’ thing is to have their jingle writers compose whole songs, which the company then sells snippets of to various other companies. This means that, in another universe, parts of “Pumped-Up Kicks” are being used to hawk some back-to-school sale, and that is just wonderful.