No one feels sorry for movie stars. Even their bad days on the job involve getting paid huge money to play make-believe and eat catered food. Still, it has to be incredibly awkward to make what you know is an insultingly awful film, and then realize you now have to spend a solid month doing publicity for it. “We’re very proud of the creative direction we were able to take Transformers … five … wait, is this five or six?”

So it’s always special when a big-name actor or director says “fuck it” and admits to the press that they created something which in fact made the world worse.

#5. Nicolas Cage And His Colleagues Launch A Social Media Protest Against Their Own Movie

In 2014, Nicolas Cage was a cast in a thriller called Dying Of The Light. He played a CIA agent with dementia who goes on a rogue mission to find a terrorist. Plot twist: The movie sucked. Double twist: This time, Cage somehow noticed this.

He knew something was awry after realizing that even his hat got to be wackier than him.

The movie was directed by Paul Schrader, who wrote Taxi Driver and Raging Bull and directed the Academy-Award-winning Affliction. So you figure he kind of knows his stuff. But after it was supposed to be finished, the studio decided it hated Dying Of The Light and ordered it to be completely reedited and re-scored, without Schrader’s input or knowledge.

Now, we will never know if there was ever a non-terrible version of this film, but Schrader, Cage, and the rest of the cast certainly seem to think so. (One change: The studio digitally gave the whole movie a washed-out, gray color scheme, otherwise known as the “Zack Snyder strategy.”) Their problem was that the filmmakers and actors had all signed a non-disparagement agreement — a standard contract these days which ensures that you’re not allowed to say anything negative about a film you made, even if it’s a figurative dumpster fire behind a store that sells car tires and human hair.

Cinematographer Gabriel Kosuth wrote an article for Variety which outlined his criticisms while carefully distancing himself from the movie, but Schrader, Cage, and others went for an even more subtle tactic. They went on social media, taking selfies of themselves wearing T-shirts printed with text from the non-disparagement agreement: 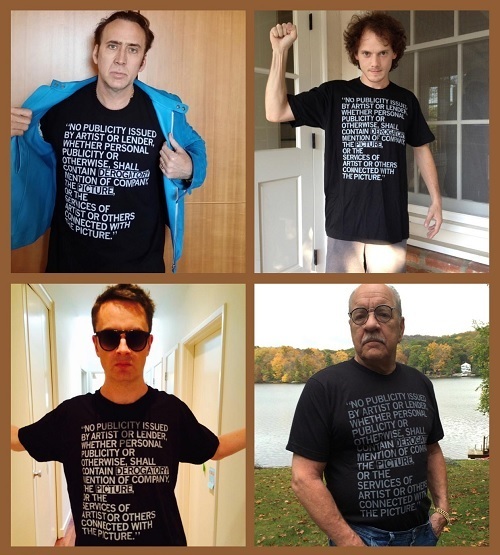 Good luck fitting that onto a Crazy Cage meme.

Granted, the stunt is useless for any viewer unaware of the context. Or anyone who saw Cage and thought, “Yep, that’s totally something Nic Cage would wear. Those are probably words he thinks a talking goat whispered to him on the set of Ghost Rider.” Still, it’s a pretty clever way to say, “My contract forbids me from saying anything bad about this movie, therefore I am forced to say nothing.”

#4. David Cross Gets In Trouble For Trashing His Alvin And The Chipmunks Sequel

Though you might prefer to forget it, you probably remember that back in 2007, Hollywood released a live action Alvin And The Chipmunks movie. You might even remember that they made a sequel — sorry, a “squeakquel” — in 2009. But who among you knows that they made a third movie in 2011, subtitled Chipwrecked?

The Arrested Development star signed on to the first movie to play the villain and, as is standard in the industry, locked himself into a contract to appear in two squeakquels, should the studio decide to make them (like if the studio decided it was mad at the audience or something). If you’re a comedian like Cross (who made his name with profane, surreal comedy like Mr. Show), this is the kind of work you do to pay the bills.

“Alas, poor career! They knew me, Brittany the Chipette. A fellow of infinite jest, of most excellent fancy.”

But the fact that he had to appear in these movies didn’t mean he had to promote them. Which is why, after fulfilling his contractual obligations with Chipwrecked, he proceeded to shit all over these movies to the press. (If he had signed one of those non-disparagement agreements, he either didn’t know or didn’t care.) He openly told audiences to avoid it during one late-night talk show appearance, then described Chipwrecked to the press as “without question, the most unpleasant experience I’ve ever had in my professional life,” and added, “It’s safe to say I won’t be working with some of those people ever again.”

One complaint was that he was “forced at legal gunpoint” to spend a week on a cruise ship dressed in a pelican costume. That does sound terrible, though it also seems like the sort of thing you’d expect to happen to you when you sign on to the Alvin And The Chipmunks franchise. 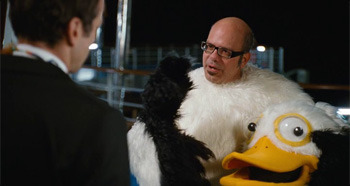 What follows is a great lesson for anyone tempted to go out in public and shit on a large-scale project they’ve worked on. For example, a film has hundreds of people working on it, some of whom may be friends and/or future employers. Keep that in mind when you hear that Cross went on TV and said that one of the producers is “The personification of what people think about when they think negatively about Jews.” This was on Conan O’Brien’s show, causing a visibly uncomfortable Conan to quickly change the subject.

Cross (who was raised Jewish) was forced to apologize at length, naming off all of the great people on the crew who treated him well and whom he loved dearly. Despite, you know, having urged audiences not to go see the movie they’d spent the last couple of years making. Also, if you’re ever in the middle of an angry string of insults and you feel the word “Jew” about to hit your tongue, that’s a good time to throw on the brakes. You’ve gone down kind of a dark path there.

#3. A Director Who Made A Movie Satirizing Directors Who Disown Their Own Movies Wound Up Disowning His Movie

Alan Smithee is possibly the worst director in film history, his name being attached to more cinematic super-turds than Ed Wood’s. But, as many of you know, there’s a reason for that: “Alan Smithee” doesn’t exist. It’s a ubiquitous pseudonym those in the film industry use if they don’t want to put their own name on a project. The Academy requires a director to submit a name, but can’t stop them from using a pseudonym. So it’s been a long-running inside joke in Hollywood for directors from David Lynch (for certain cuts of Dune) to Dennis Hopper (for Catchfire) to credit Smithee for their misfires. 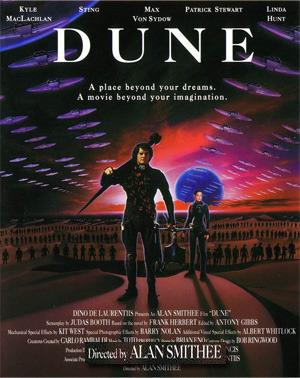 That is, if you feel Sting wearing nothing but a ribbed codpiece counts as a misfire …

Now, in 1997, screenwriter Joe Eszterhas and director Arthur Hiller came up with a funny idea for a movie that became Burn Hollywood Burn, starring Eric Idle, Sylvester Stallone, and Jackie Chan. The plot concerns a director (played by Idle) who makes a film which, due to studio interference, is re-cut behind his back into a terrible movie that he wants nothing to do with, but he finds himself unable to remove his name from the project because — get this — his actual name is Alan Smithee. 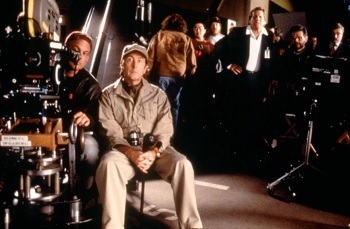 And international law forbids someone from using any other fake name ever.

That’s right, they made an entire movie out of a one-note gag that would be much better suited to a three-minute comedy sketch (something that Saturday Night Live had to learn the hard way). Here’s the kicker: Before Burn Hollywood Burn hit theaters, the studio told Eszterhas to go back to the editing room and make a bunch of changes without Hiller’s knowledge. The result? When Arthur Hiller saw the final product, he hated it so much that he demanded his name be removed from it upon release. The name he chose instead was … well, take a guess. 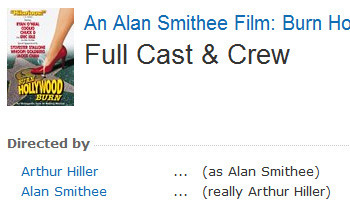 If you’re thinking this was all part of some kind of elaborate performance art or hoax, it was certainly an expensive one: Burn Hollywood Burn, a movie about Alan Smithee, directed by “Alan Smithee,” was such a box office disaster that the Academy wound up banning anyone from putting that cancerous name on a film ever again. So if your name really is Alan Smithee, we’re sorry to say that your career prospects have become a little more limited.