We don’t expect much from famous people on social media. Advertise your stuff, share a few humanizing photos, don’t be a turbo racist — you know, the basics. But that’s not always what we get. A few well-known figures are either using their social media accounts to explore the line between art and communication, or else they’re just total weirdos who also happen to be famous. You be the judge.

Scott Walker is both the governor of Wisconsin and some of the best evidence we have of the existence of pod people. His entire Instagram account is an almost terrifyingly aggressive argument that he is most assuredly a real human being. The key to that argument? Ham and cheese sandwiches in brown bags.

Walker has realized that humans eat lunch, but he hasn’t yet gleaned that we like variety. He claims that he’s eaten two ham and cheese sandwiches every day for the last 26 years, which means he’s eaten 19,000 to date. His Instagram documents these lunches in a parade of existential dread that celebrates mechanical monotony. 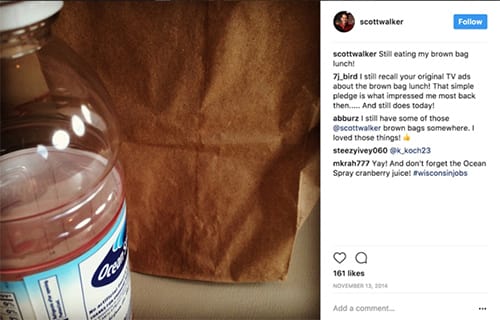 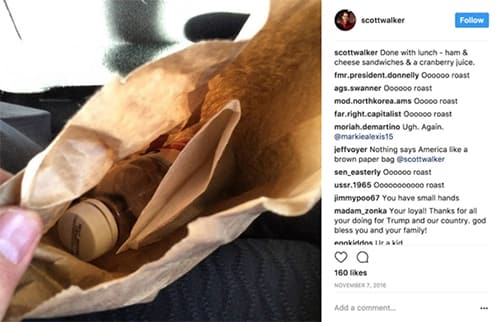 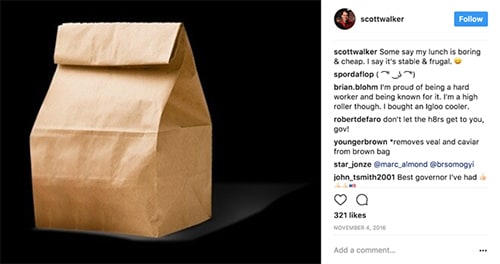 Look at how frugal and relatable and totally-not-a-murderous-doppelganger he is! And what do humans from Wisconsin wash down a ham and cheese sandwich with? Milk, of course. Humans from Wisconsin enjoy dairy and devour it at all times. Unceasingly. Check out this series of glamour shots we’ve titled “Unnaturally Still Life, With Milk.”

Scott Walker via Twitter“Some people use a straw in their milk carton, but I’m a bit of a rebel.”

But Scott has a wild side, too. Like many real human beings, he has a sweet tooth. Like all human beings from Wisconsin, that sweet tooth can only be satisfied with dairy consumption. Sometimes he simply can’t resist indulging in a single scoop of plain vanilla ice cream from Cold Stone Creamery. Sprinkles were deemed “too controversial.”

Scott Walker via Instagram“You can ask them to microwave it to room temperature, but you can tell they don’t like it.”

So congratulations to Governor Walker on maintaining such a vibrant and compelling social media presence. Regardless of your political beliefs, we can all look at his posts and think “Scott Walker is possibly a human being.”

You’d assume that William Shatner’s Twitter would be filled with Star Trek tweets and T.J. Hooker jokes. You know, reliving the glory years, as we’d expect from any aging celebrity. But Shatner consistently live-tweets YA shows that he has no stake in, like The Tomorrow People and The 100, while also getting into serious arguments about imagined relationships between their characters. Yes, William Shatner is fighting in the shipping wars with all the enthusiasm of a narutolover_69. And he live-tweets so thoroughly that nothing passes by without comment, even when it really should.

William Shatner via TwitterWe’re not in a position to judge anyone’s hobbies, but if he starts a recap blog, we’re calling social services.

6 Real Scandals Crazier Than Anything On 'House Of Cards'

What’s going on here? Does someone need to get Shatner out of the house more often? According to Shatner himself, in response to a crucial investigation by The Washington Post, his friend Misha Collins had directed an episode of the CW show Supernatural, and announced that he’d be live-tweeting it. And then Shatner, for the hell of it, said he would too. Other CW actors started asking him to do the same for their shows, and he agreed, provided they send in signed items for his charity auction. So actors made donations, and Shatner’s new career as a live-tweeter was born. Although that still doesn’t explain his posts about shipping.

Is he genuinely invested in these hypothetical relationships, writing epic fan fiction and tattooing “Destiel” on his inner thigh? Or is this the work of a harried publicist who seriously misread their audience? We’ll let your fevered imagination decide, but we know which option we choose to believe.

Cam Newton Tweets Like He’s Always Being Attacked By Bees

A lot of people stereotype football players as dumb jocks, but many athletes use social media to demonstrate their eloquence and humor. Then there’s Carolina Panthers star quarterback Cam Newton, who uses Twitter to demonstrate … uh … we’re not sure, actually.

This isn’t a joke. For years, he’s been writing Tweets like a man who’s making his first attempt at using a keyboard. And it’s not sloppiness either, because it takes more work to pull up all those weird characters than it does to mash blindly at an iPhone and hope for the best. Is this a new concussion symptom that the NFL needs to investigate and then suppress evidence of? Even his sponsored Tweets are written in tongues. That’s a level of fame we can’t begin to imagine, being handed a giant sack of money to advertise a product on social media, and churning out this:

Cam Newton via Twitter“Mr. Newton’s endorsement contract clearly states he may tweet in English or R’lyehian”

Sometimes a publicist Tweets for him. Can you spot the difference?

Great Clips knows who they’re dealing with, and won’t waste good ad money on propaganda from R’lyeh. Can someone on the Panthers teach Newton how to remove Wingdings as the default font on all his devices so he doesn’t come across like he’s tweeting mid-exorcism?

Cam Newton via Twitter“13375p2ak is for quitters.”

Norm Macdonald uses Twitter to share fun anecdotes about his time at Saturday Night Live, stories about his current interactions with other comedians, or the occasional pithy remark. But if you’re thinking about following him for any of that, you’re first going to have to sift through endless hours of the most boring sports play-by-plays known to man.

Norm Macdonald via TwitterTry reading this and not hearing his voice.

Norm Macdonald via TwitterWaiting for the punchline is a textbook example of the sunken cost fallacy.

Why does Macdonald persist? No one knows. Fans have speculated that it’s a meta joke about the nature of broadcasting every minute of our life on social media. But those theories don’t explain why he’s kept the supposed gag up for years. Maybe he really needs a friend to watch games with. Whatever his reasons, he’s shown no signs of stopping, so go ahead and follow him if you need real-time sports updates but have no access to a television, any sports website, or an AM radio.

The Instagram account @onionringsworldwide was an extensive collection of reviews aimed at the discerning jet-setter who travels all across this great wide world of ours in the pursuit of every fast food joint’s least-popular side dish option.

The dogged reviewer’s identity remained hidden until one follower used their wasted forensic talents to correlate onion ring review dates with Lorde’s tour stops. They also noticed that of the account’s 24 followers, three were Lorde’s friends, and one was Lorde herself. This was … possibly the more compelling evidence.

Her secret passion outed, Lorde told Jimmy Fallon that it wasn’t some meta commentary on the cyclical nature of life or anything — just an inside joke between her and her friends, who genuinely liked onion rings. The greatest tragedy of this tale is that once she was discovered, the Lorde of the Rings ended her reviews for good.

Maybe there’s a dark lesson here about how we’re so obsessed with the lives of celebrities that even a private joke between friends becomes newsworthy. A warning that we should all reexamine the role that fame plays in our lives before we destroy the very things we love.

Lorde via InstagramOr maybe it’s that the Burger King at the gas station near Hatfield needs to change their damn fryer oil already.

Alex Perry is a freelancer who wrote a novel about time-traveling stalker and a heartwarming kid’s book about a boy and his genetically modified pig / organ donor. She is the mind behind this secret Twitter account. She prefers waffle fries to onion rings. Greg Tuff is trying his best to hunt down Instagram’s secret model factories. Find out the results on his Twitter.

Friendly reminder that Season 13 of Supernatural is still ongoing and a 14th season has yet to be confirmed, please consider calling your representatives in Congress or someone at The CW about renewal, whichever is easier for you.