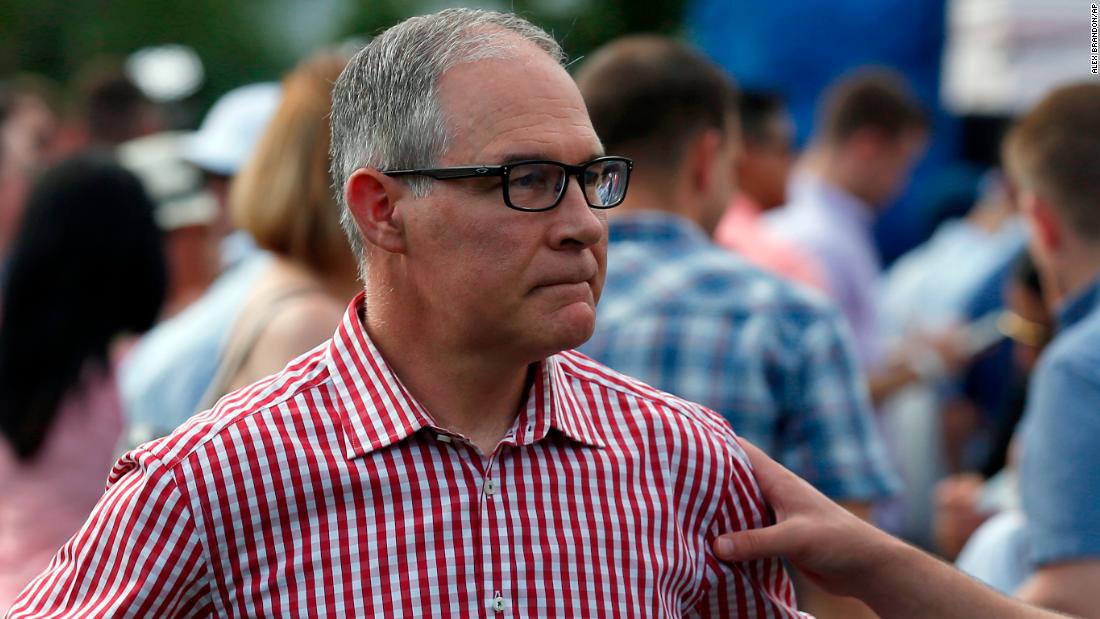 (CNN)When Scott Pruitt “resigned” as the head of the Environmental Protection Agency on Thursday, only one relevant question jumped to mind: What the hell took so long?

And yet, day after day, terrible headline after terrible headline (after terrible headline), Pruitt stayed in the job. The White House would insist Trump was “troubled” by all of these accusations against Pruitt and that they were conducting some sort of review — and yet as days turned into months, everyone — including Republicans across Washington — wondered why Trump didn’t jettison his most troublesome Cabinet secretary.
Here are four theories aimed at answering the “what took so long?” question.
1. Pruitt did exactly what Trump wanted. Trump campaigned on the idea that the EPA has turned into liberals’ dream of overregulation of average people. He picked Pruitt to undo many of the regulations the Obama administration had put in place on things like coal and water. According to an analysis by Politico of Pruitt’s first year in office, the EPA either withdrew or delayed regulations 47 times — a massive increase from the 14 withdrawals/delays in the first year of the Obama administration. Pruitt was effectively deconstructing the regulatory state. And so, Trump liked him.
“While Security spending was somewhat more than his predecessor, Scott Pruitt has received death threats because of his bold actions at EPA. Record clean Air & Water while saving USA Billions of Dollars. Rent was about market rate, travel expenses OK. Scott is doing a great job!” Trump tweeted in April. Days before, White House press secretary Sarah Sanders offered up this on Pruitt: “The President thinks he is doing a good job, particularly on the deregulation front.”

2. Trump saw some of himself in Pruitt. Pruitt is brash and unapologetic about his views and his conduct. And in both Oklahoma and Washington, that willingness to speak his mind made establishment types very nervous. And once Pruitt was in Washington, he was the focus of a seemingly endless stream of negative news coverage, which he insisted was false and driven by liberals who wanted him to fail. Sound like anyone else you know?
3. There were so many problems, they canceled themselves out. There’s a great scene in “The Simpsons” where Mr. Burns, the decrepit old tycoon, goes to the doctor. After a checkup, the doc informs Mr. Burns that he is “the sickest man in the United States. … You have everything.” And yet, Mr. Burns is perfectly healthy. How? Because all of his ailments are blocking each other from attacking his body; “All of your diseases are in perfect balance,” the doctor tells the astounded Burns.
I’ve been thinking about Scott Pruitt in those terms for a while now. There are so many problems, so many ethical issues, so many bad stories that they all sort of cancel each other out. As in: No one could follow all of the various transgressions committed by Pruitt. The sheer number of allegations may well have led Trump to sort of tune them out — under the belief that they couldn’t all be true.
4. Trump is a contrarian — in this and all things. When the news of Pruitt’s “resignation” hit the White House, there was reportedly cheering from some of the staff. For months, Trump had been urged to get rid of Pruitt by virtually everyone on his senior staff. Trump views himself as at his best when he is going against the crowd, bucking the conventional wisdom. If everyone is saying “X,” Trump is naturally drawn to “Y” — even if in a vacuum he would choose “X.”
Even when he spoke about Pruitt Thursday afternoon aboard Air Force One, Trump was unwilling to criticize the former EPA head. “He’ll go on to great things and he’s going to have a wonderful life, I hope,” Trump said of Pruitt. “But he felt that he did not want to be a distraction for an administration that he has a lot of faith in.”
The truth is that some combination of these factors is what kept Pruitt in his job for as long as he stayed. As Trump said Thursday afternoon, there was “no final straw” in the Pruitt situation. (Sidebar: If Pruitt actually resigned of his own free will, why would there be any straw at all?) The most likely scenario is that Trump’s patience simply wore out; he got tired of defending Pruitt and gave into advisers’ wishes that the EPA chief be sent packing.
That Pruitt is gone is not at all remarkable. That he stayed for so long really is.