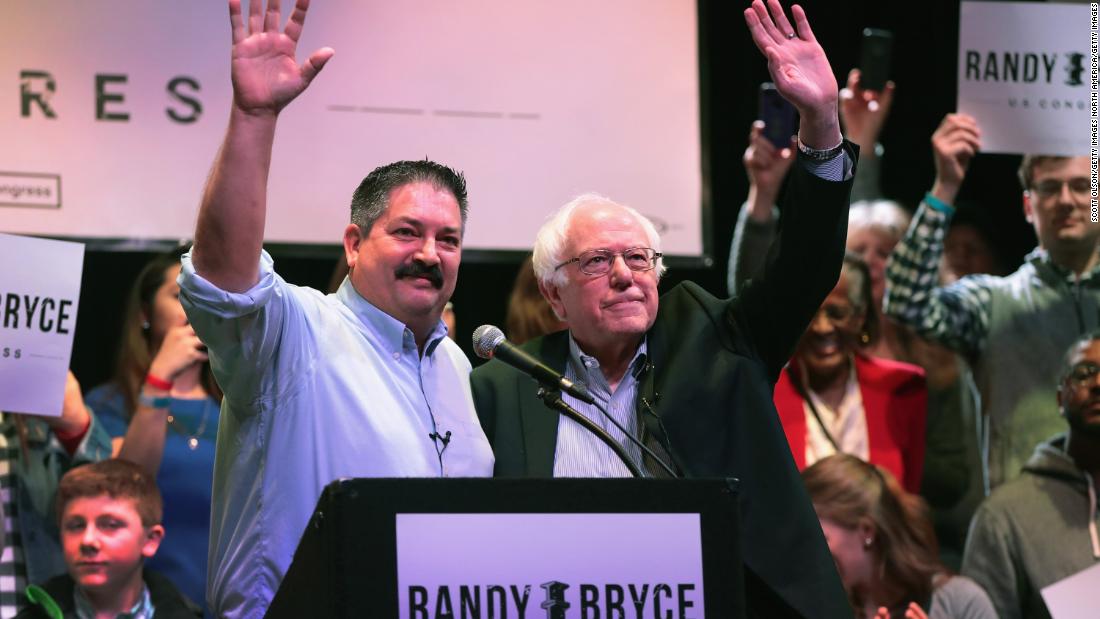 Washington (CNN)Our weekly roundup of the news, notes and chatter about the prospects for the next Democratic presidential race:

He rallied with Rep. Keith Ellison, now a candidate for attorney general in Minnesota, on Friday morning and again in the afternoon. On Saturday he’s in Wisconsin alongside Sen. Tammy Baldwin, who’s up for re-election in the fall, and later on, Randy Bryce, a Democratic primary candidate looking to replace House Speaker Paul Ryan in the state’s 1st District. Sanders wraps the weekend in Pennsylvania on Sunday, with a morning speech at the American Federation of Teachers convention and afternoon rally with Braddock Mayor John Fetterman, the Democratic nominee for lieutenant governor. (Ahead of his trip to western Pennsylvania, Sanders in an interview with the Pittsburgh Post-Gazette praised Summer Lee and Sara Innamorato, a pair of Democratic Socialists of America-backed state House candidates who won primaries against incumbent Democrats, calling their campaigns “really quite incredible.”)
The swing is reminiscent of Sanders’ travels during the 2017 Obamacare fight. This time, though, it’s about defeating the nomination of Brett Kavanaugh while elevating Democrats ahead of the fall and, Sanders hopes, merging the two issues in the process. These are all states that could be important in the 2020 Democratic primary and general election. President Donald Trump won Wisconsin and Pennsylvania and only narrowly lost in Minnesota. Sanders now hits them all alongside colleagues and candidates who largely share his politics.
Monday means it’s back to Washington, but the show only ramps up from there. Sanders will host a town hall event on Capitol Hill that will feature workers from a bunch of major, super-rich American companies — to talk about how they’ve been treated (not well, they say) by their corporate bosses, who were invited to join. The event will be livestreamed, like others Sanders has done, pulling in millions of viewers, by a combination of progressive activist groups and media outlets.

Coming up on the Sunday shows:

— None of the 2020 Democratic prospects are booked this week.

HARRIS AND BOOKER VS. KAVANAUGH: Two 2020 Democratic prospects, Sens. Kamala Harris of California and Cory Booker of New Jersey, are preparing for an elevated role in the progressive opposition to President Donald Trump‘s Supreme Court nominee, Brett Kavanaugh. Both are on the Senate Judiciary Committee, which positions them to grill Kavanaugh at his confirmation hearing. Harris is focusing on abortion rights and health care, while Booker is so far arguing that Trump shouldn’t be able to appoint a justice while under investigation. Here’s Eric’s story.
RICHARDS’ BIG CROWD IN DES MOINES: Cecile Richards, the former Planned Parenthood president, drew a crowd of 250 at the annual Polk County Democratic Party Women’s Event in Des Moines, Iowa, on Thursday night. Polk County Chairman Sean Bagniewski tweeted that it was the largest crowd in the event’s 18-year history. “And everyone here wants her to run for something,” he said.
GARCETTI TALKS 2020: Los Angeles Mayor Eric Garcetti made news in an interview with CNN’s Van Jones set to air Saturday at 7 p.m. ET on “The Van Jones Show.” Here’s his answer on whether he’s running for president: “I have no idea. I really don’t. I mean, I have to talk with family.”
But the rest of Garcetti’s answer is more revealing. Watch him name-drop two of the first four states to vote in the nominating process: “But I’m exploring and looking at America and realizing when I go to a place like Iowa, the number one wind state in America with the number one solar city in America, that should bring us together. Jobs in the green economy, as you know, don’t just exist in the coastal areas. When I talk to folks that are in South Carolina, they say it’s still not where we need to be in terms of civil rights and police and community relations. As a mayor, I think I can bring something to that conversation.”
LANDRIEU’S UNCERTAINTY: Former New Orleans Mayor Mitch Landrieu sat down with Hill.TV this week and discussed his political future now that he’s no longer in office. When asked about potentially running in 2020, he said he doesn’t intend to run for president. “I want a little time to think and get some perspective on life and just see where the future takes me, but it’s not my intention right now to do that,” Landrieu said.

Notes from the right:

2020 RNC IN CHARLOTTE? According to The Wall Street Journal, the Republican National Committee is nearing a final agreement with the city of Charlotte, North Carolina, to host the 2020 Republican National Convention, moving away from Las Vegas, which was previously reported to be a top contender along with Charlotte. With a Republican President, it would be expected to be the site of the nomination of Donald Trump for a second term.
Charlotte hosted the Democratic National Convention in 2012, when President Barack Obama was nominated for second term. The city’s location within a battleground state makes it a highly coveted spot for a convention, which draws thousands of delegates and political operatives.
KASICH NOT BACKING DOWN: Ohio Gov. John Kasich is still playing coy about his political aspirations. The term-limited governor, who will leave office in January 2019, was asked again on Thursday during an appearance at the National Press Club in Washington if he will run for president again. “The Lord is largely going to determine my future, and I don’t know what it is,” Kasich said. “I have no clue what I’m going to do, and I mean it sincerely.”
Kasich spent time at the event criticizing Trump‘s foreign policy and trade agreements, saying the administration has used a “wrecking ball strategy” to dismantle the nation’s trade and military alliances.