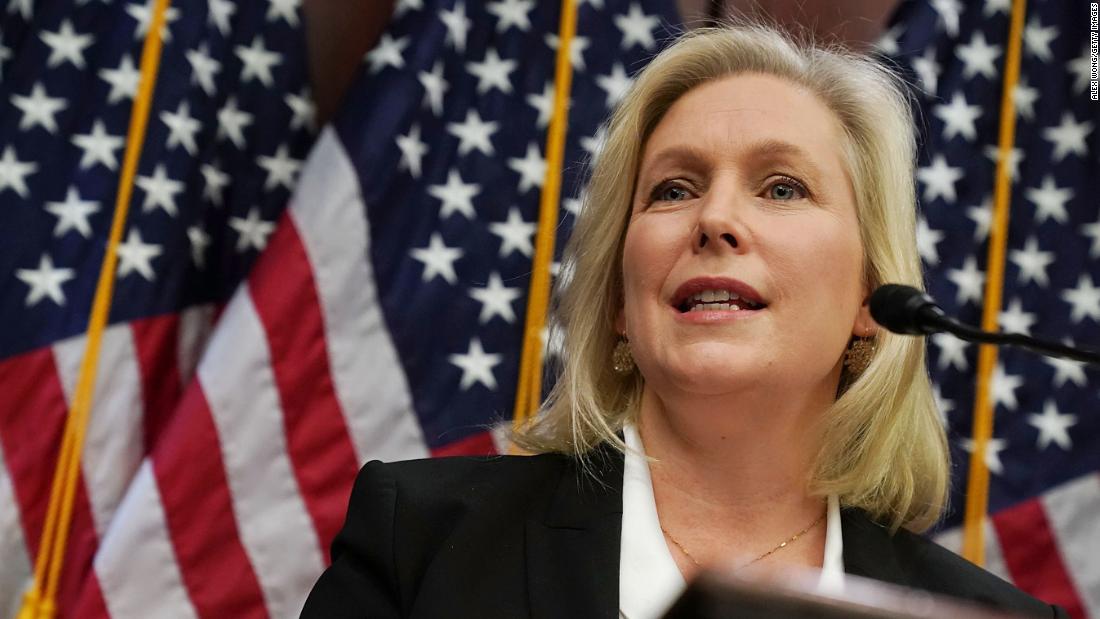 Washington (CNN)Our weekly roundup of the news, notes and chatter about the prospects for the next Democratic presidential race:

The call to dismantle US Immigrations and Customs Enforcement had mostly been confined to far-left progressives, but this week New York Sen. Kirsten Gillibrand told CNN’s Chris Cuomo she supports abolishing the agency.
“It has become a deportation force, and I think you should separate the criminal justice from the immigration issues,” Gillibrand said.
“We believe that we should protect families who need our help, and that is not what ICE is doing today, and that’s why I believe you should get rid of it, start over, reimagine it and build something that actually works,” Gillibrand said.
New York Mayor Bill de Blasio also called on ICE to be abolished on Friday.
The move puts Gillibrand and de Blasio to the left of Vermont Sen. Bernie Sanders, who has noted that he voted against ICE’s creation in 2002.
California Sen. Kamala Harris told MSNBC last weekend that the United States should “probably think about starting from scratch” when it comes to enforcing immigration laws.
“I think there’s no question that we’ve got to critically re-examine ICE and its role and the way that it is being administered and the work it is doing,” she said.

— On Saturday, Harris will speak at an 11 a.m. PT “Families Belong Together” immigration march at Los Angeles City Hall.
— Washington Gov. Jay Inslee, fresh off an Iowa trip, will keynote the Florida Democratic Party’s Leadership Blue Weekend gala Saturday night in Hollywood, Florida.
— Sen. Elizabeth Warren will be at a rally in Boston on Saturday protesting the separation of migrant families at the border. Last Sunday, she was in Texas, visiting the McAllen Customs and Border Protection processing center and the Port Isabel ICE Detention Center. On Tuesday, Warren wrote a long and detailed Facebook post about what she found there. “The (CBP) warehouse is enormous, with a solid concrete floor and a high roof. It is filled with cages. Cages for men. Cages for women. Cages for mamas with babies. Cages for girls. Cages for boys,” she wrote. Of the ICE building, Warren said: “Let’s be clear: Port Isabel isn’t a reunification center. It’s a detention center. A prison.”

Coming up on the Sunday shows:

— None of the Democratic 2020 prospects are booked so far.

HARRIS: ‘I’M NOT RULING IT OUT’: Harris told MSNBC’s Kasie Hunt that while her focus is on the 2018 elections, a 2020 presidential run remains an option. “I’m not ruling it out, no,” Harris said.
WARREN SOUNDS LIKE A CANDIDATE: Warren made her first early-voting?-state visit last weekend in Nevada. She keynoted a state party event in Reno, and then later in Henderson, sounded like her eyes are on 2020. She said she is “in this fight and I am in it all the way.” She later referred to fighting President Donald Trump in “2018 and rolling on into 2020.”
A BLOOMBERG PRESIDENTIAL RUN … AGAIN?: Former New York City Mayor Michael Bloomberg has signaled he plans to run for president as a Democrat in 2020, CBS New York reported, which would make him both the oldest and richest person to seek the job. The report comes after news last week that Bloomberg is prepared to spend an eye-popping $80 million on the midterm elections, throwing most of his financial weight behind the Democratic effort to take control of the House this fall.
HICKENLOOPER: 2020 DECISION COMING SOON: Asked about a 2020 presidential run, Colorado Gov. John Hickenlooper said on a Kaiser Health News podcast that he and his wife “have been talking about it for a couple months and talking to old friends whose opinion we respect and trust.” On his timeline to decide, he said: “We’re going to try and sort through it this summer.”
KANDER IS RUNNING … FOR MAYOR: Former Missouri Secretary of State Jason Kander has been traveling to early primary states (16 Iowa trips, 12 New Hampshire visits, many tied to his voting rights group Let America Vote), hiring staff members and getting to know national Democrats all in preparation for a run for … mayor of Kansas City.
McAULIFFE HITS THE TRAIL: Former Virginia Gov. Terry McAuliffe is booking some out-of-state political travel. He’ll be in Wichita, Kansas, on August 25 to keynote the Kansas Democratic Party’s “Demofest 2018” banquet.
LETTERS FROM BERNIE: Sanders will host a town hall — to be streamed live online — for workers from four of the country’s biggest companies next month. And he’s inviting their CEOs. On July 17, Disney, Amazon, McDonald’s and Walmart employees will join Sanders on Capitol Hill to discuss “the enormous disparity between the wealth of corporate executives and the wages and treatment of the companies’ workers.”
The letters inviting the corporate leaders, including big names like Amazon’s Jeff Bezos and Disney’s Bob Iger, who has feuded with Sanders in the past, went out on Thursday. Read the letters here. Sanders told CNN he hoped the execs would “have the guts to sit on a panel with their own employees and explain why it’s acceptable that they receive huge compensation packages while their very own workers are struggling to put food on the table. I hope they have the courage to do so. The invitation is sincere.” No word yet on whether they’ll be taking up the offer.

Democrats took a big step this week toward reducing superdelegates’ influence on the 2020 presidential race.
The Democratic National Committee’s Rules and Bylaws Committee backed a plan that would prevent superdelegates from voting on the first ballot at the convention, if the race is contested. They’d be able to vote starting on the second ballot.
The plan still needs the full DNC’s approval, and a vote won’t come until August. But the changes backed by DNC Chair Tom Perez have one prominent supporter: Sanders.
“This decision will ensure that delegates elected by voters in primaries and caucuses will have the primary role in selecting the Democratic Party’s nominee at the 2020 convention,” Sanders said in a statement. “This is a major step forward in making the Democratic Party more open and transparent, and I applaud their action.” CNN’s Adam Levy has been all over this. Don’t miss his story.

Former Vice President Joe Biden sat down with The Washington Post’s Josh Rogin to discuss diplomacy and foreign relations in the age of Trump, and of course the question about Biden’s political future came up. Rogin asked the former vice president whether the state of the nation and its status worldwide make him want to run for president in 2020. Biden said no. “It makes me feel guilty about not wanting to (run for president),” he said. “But it doesn’t make me want to. I’m not looking to live in the White House, I’ve seen it up close.”
He added: “But all kidding aside, I don’t know what I’m going to do.”
While Biden’s been seen as a top potential 2020 contender due to his experience, name recognition and likability, some on the left believe he might not match the moment. With Rep. Joe Crowley‘s stunning primary loss in New York’s 14th Congressional District on Tuesday to progressive newcomer Alexandria Ocasio-Cortez, some are wondering if putting forward an older white man to represent the party is what the Democratic electorate is looking for, as explained in a piece in The Atlantic.
“If Biden runs in 2020, these old views will dog him. He’s likely to face younger Democrats who, like Ocasio-Cortez, entered politics after the New Democratic era had ended, and older ones, like Sanders, who rejected it all along. And he’ll do so in an era in which, more than at any time since the early 1970s, the activist left is defining the Democratic Party,” Peter Beinart writes.
Biden will stay in the spotlight, though. He will deliver the keynote address for the Illinois Democratic County Chairmen’s Association brunch on August 16 in Springfield, which is held in conjunction with Democrat Day at the Illinois State Fair. It will be Biden’s first appearance in the capital city of Illinois since August 2008, when then-Sen. Barack Obama spoke at the Old State Capitol to announce Biden as his running mate in the presidential election.