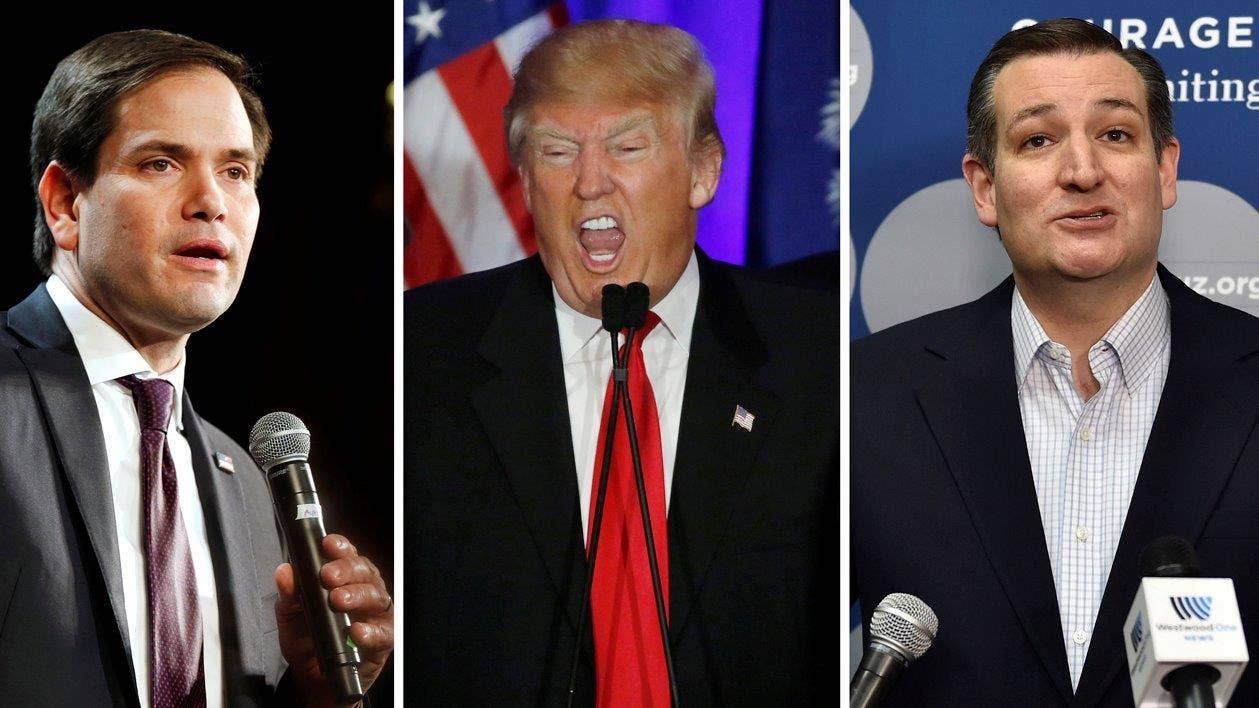 Insults aside, the 2016 Republican presidential contenders are spending their final hours before Super Tuesday with dueling agendas: if you’re Donald Trump, it’s a final push to “put this thing away” — and if you’re Marco Rubio, Ted Cruz and John Kasich, it’s doing all you can to live to fight another day.

In total on Super Tuesday, 595 delegates are at stake across 11 states in the Republican race (nearly half the number needed to secure the nomination).

Hillary Clinton and Bernie Sanders, meanwhile, are battling over 865 delegates across a dozen states in the Democratic race (roughly a third of the number needed to secure the nomination).

In the run-up, Florida Sen. Rubio and Texas Sen. Cruz on the GOP side traded attacks earlier Monday with frontrunner Trump.

But the nasty state of the race was starting to take its toll. And Rubio vowed at his second rally of the day, in Georgia, to start dialing down the insults.

This, after the Florida senator had to initially let South Carolina Gov. Nikki Haley speak for him, after he temporarily lost his voice.

On the sidelines of the three-way GOP battle in the top tier, Ohio Gov. Kasich and retired neurosurgeon Ben Carson are also looking to put up a showing on Tuesday despite the long odds. Kasich announced the endorsement Monday of former New Hampshire Gov. Judd Gregg.

And on the Democratic side, Sanders was fighting to hold down front-runner Clinton’s numbers on Tuesday, after she crushed him in Saturday’s South Carolina primary.

The tone on the Democratic side still was markedly more civil than on the GOP side.

Polls show Trump in a commanding lead to pick up a significant share of the delegates, as he looks to build a daunting lead over his rivals. But Rubio and Cruz have been relentless in slamming Trump’s business record, his character and even his physical attributes — urging his supporters to reconsider.

A disqualifying & disgusting response by @realDonaldTrump to the KKK. His coddling of repugnant bigotry is not in the character of America.

Unfortunately today, there are a significant number of our fellow Americans in the Republican Party who have chosen, at least for the moment, to support someone who appeals to their fears and anxieties, Rubio said at an event in Alcoa, Tenn.

And they have a right to be fearful and anxious. But what no one has a right to do is to take advantage of that, to carry out the most extensive con job in American political history,” Rubio said.

Its easy to talk about making America great again, you could even print that on a baseball cap, Cruz said in a reference to Trumps campaign slogan at a rally in Dallas, Texas. But do you understand the principles and values that made America great in the first place?”

Cruz went on to criticize Trump’s alleged history of hiring illegal immigrants (for a project decades ago in New York), and allegedly choosing immigrants over American workers.

Rubio also attacked Trump for initially refusing to denounce David Duke, the former Ku Klux Klan Grand Wizard, when asked about Dukes support for his campaign on CNNs State of the Union on Sunday. Trump has since disavowed Duke and on Monday blamed a faulty earpiece for why he didnt do so during the interview.

2012 Republican presidential nominee Mitt Romney added his criticism over the Duke controversy Monday, tweeting that Trump’s refusal to condemn him was “disqualifying and disgusting.”

Trump dismissed Rubio’s attacks as a desperate attempt to make up for flagging poll numbers.

“I have to listen to a little guy like Rubio saying ‘he’s a con man.’ He had no choice, I guess he had to come up with something as he’s getting creamed in the polls,” Trump said.

Trump called Rubio a “lightweight” and said he thought he might have had to catch the Florida senator when he was getting grilled by Chris Christie during the Feb. 6 GOP debate. He also repeatedly called Cruz a liar and mocked him for not having picked up any endorsements from fellow lawmakers.

“These people, they’re not going to take you to the promised land,” he said.

Rubios attacks frequently drifted from serious attacks to mocking Trumps appearance. On Sunday, Rubio had joked that Trump is going to make America orange and mocked his small hands.

On Monday, when his speech was interrupted by a nearby plane, Rubio took the opportunity to mock Trumps hair.

I just want to make sure thats not Donalds plane, Rubio said. Its called Hair Force One.

After temporarily having Haley speak for him at a subsequent stop in Atlanta, Rubio regained some of his voice and told supporters “a vote for Donald Trump tomorrow is a vote for Hillary Clinton in November.”